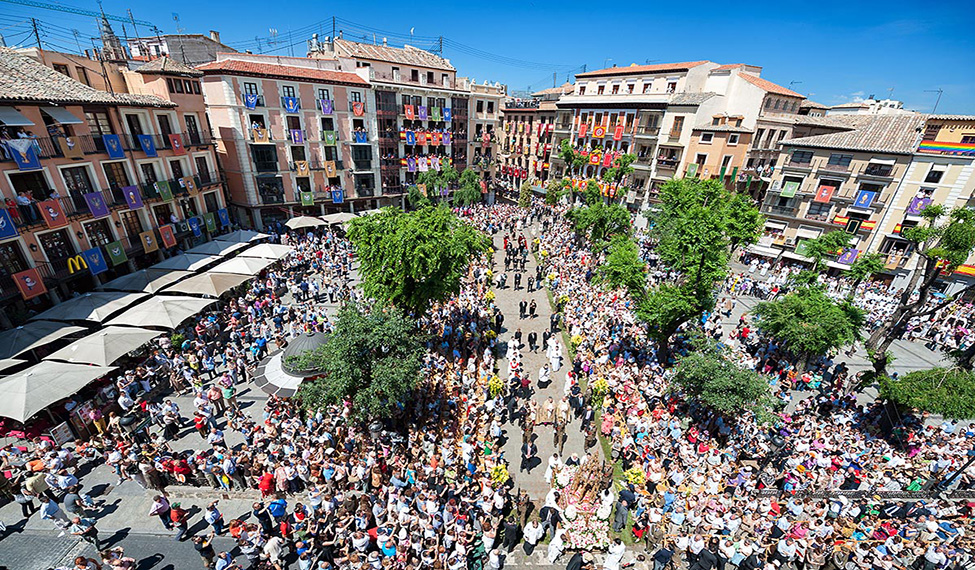 The magnificent monstrance crafted by Enrique de Arfe at the beginning of the 16th century, the most important of many objects that are kept safe in the Main Cathedral, passes through the adorned streets of Toledo in the Corpus procession. This is how the city celebrates their most grandiose day. The official consideration as a Festival of International Touristic Interest only confirms its importance, renowned for centuries. Since the year 1418, the labyrinthine urbanism of the historic old town transforms into a grandiose stage, for it is in its streets where the procession is first celebrated in Spain. Corpus is embedded in the history and tradition, art, spirituality and colorfulness of Toledo.

Whoever comes to Toledo to witness the Corpus procession will encounter a city that has been highly decorated for many days before, when they begin the preparations both in the streets where the procession will pass as well as the Cathedral. The streets are covered in ancient awnings that come from the guilds of weavers and silk workers. The Cathedral can also be seen decked with eight enormous Flemish tapestries from the 17th century, which are placed on its walls during these special days. Some streets adjacent to the procession’s path are also adorned, as well as the patios of individual homes, who open their doors to visitors, in many cases just for these dates.

The day before, the streets of the processional route are doused with fragrant plants (lavender, rosemary, thyme). In the afternoon a small parade passes with the Tarasque, the Giants and a series of musical troupes to entertain the Toledans and prepare them for the following day. Around eleven at night, they have a type of rehearsal with an official entourage where the church official passes, dressed in black, whose staff corresponds to the height of the monstrance: he goes measuring the corresponding spaces so that nothing will impede the great show the next day. The streets are filled  with people until very late at night.

The day of Corpus dawns with the reveille and firing of royal cannons. At 11:00, a salute of mortars announces the procession’s exit from the Cathedral’sLlanadoor. From there, to the four streets, the popular plaza deZocodover, the narrow street ofAlfileritos… whatever place is good to present the passage of the Corpus procession, which advances slowly through the delicate tracing of the legendary city, among a crowd that overflows every corner, every balcony.

The monstrance was executed by Enrique de Arfe, silversmith of German origins, between 1515 and 1523. He was commissioned by the Chapter of the Cathedral of Toledo to house the ostensory of gold (the “little monstrance”), which belonged to Queen Isabel the Catholic, made by Jaume Aimeric. This ostensory, according to legend, was made with the first gold that came from America.

It measures 309.5 meters in height, it is gold-plated silver and is devised as a gothic tower with a hexagonal floor plan. The whole of it rests upon a silver base with bronze appliqués, trough-shaped and held up by four silver angels, made in 1741-1742 by the silversmith of the Cathedral Manuel Bargas Machuca, after models of the sculptor Narciso Tomé. Upon this base six fasciculated pillars are raised, crowned by pinnacles and decorated with pedestals, niches with silver figures, heraldic shields and chambranas. The pillars are joined to six braces by two flying buttresses each, at two heights.

It is in the interior of this body where the gold ostensory resides, affixed to a pedestal with a star-shaped base. It is a portable monstrance. Atop this gold ostensory, a cylindrical dovecot with hollows from which appear decorative doves and a large sapphire.

Atop Arfe’s Monstrance, a base adorned with precious stones above which sits a cross of gold-plated silver, with eighty-six pearls and two emeralds, work of jewelry designer Láynez.