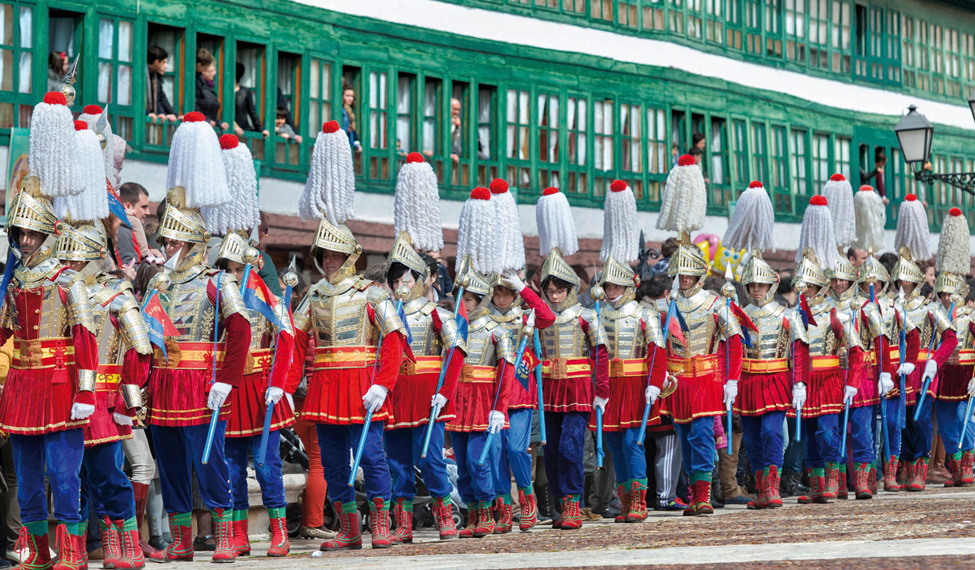 The Calatrava  Passion Route is a show that goes beyond the religious scope, a five-day itinerary along the main activities carried out from Spy Wednesdayto Easter Sunday in the Campo de Calatrava; a route along Aldea del Rey, Almagro, Bolaños, Granátula, Miguelturra, Pozuelo, Torralba, Valenzuela, Moral and Calzada de Calatrava municipalities.

Calatrava Easter is an opportunity to get to know the cultural, natural and gastronomic heritage which, as a collective identity, shapes all municipalities in Calatrava region.

The Cistercian Order of Calatrava, from their original headquarters in Calatrava La Vieja castle, organized the reconquest of a territory; under their rule, many municipalities would emerge. With the surname of the Order in their names, they now share unique cultural features, the ones from the Campo de Calatrava, which are especially exhibited in Easter.

Very characteristic are their historical re-enactments about Christ Passion with old romances and music typical from each municipality. In gastronomy, it is worth highlighting the Calatrava flower, a cross-shaped pastry, and fritters. Arts and crafts are also present, from tinsmiths making the armors for the “Armaos” (armed) brotherhood to the Calatrava blond lace mantillas for the women.

The “Armaos” brotherhoods, typical from the Campo de Calatrava and of military origin, wear their traditional armors including from the Roman-type ones to the ones from the 16thcentury. On Holy Thursday in the morning, in Aldea del Rey, Judas Iscariot betrayal to Jesus is staged. In Bolaños de Calatrava the “Armaos” start looking for Jesus in the morning, dramatizing the arrest at the end of the afternoon. In Granátula de Calatrava, during the arrest, the captain of the Roman troop signs “the arrest romance”. In Almagro, it is worth mentioning “The Snail” dance, where the “Armaos” move opening and closing a circle around their flag.  In Moral de Calatrava, this dance is called "Seashell" and is performed on Easter Sunday as a finale.

Significant are “El Paso” (the step) processions, held in the morning in Torralba de Calatrava and Granátula de Calatrava. It is the day when traditional pastries -flowers, doughnuts, wafers and roscapiña (wafers made out of flour, sugar, wine and cinnamon) – are shared at breakfast.

The so-called “Heads and tails game” relives the raffle of Jesus Christ tunic. A very old tradition held in all the municipalities, although it is in Calzada de Calatrava where it is at its best. A big circle is painted on the ground and thebanca, or betting pool, matches the bet of each player. Afterwards, the auctioneer tosses two copper coins, with the two heads up. If both coins land heads side up, thebancawins. If both coins land tails side up, the gamblers win. If they get heads and tails, the coins are tossed again.

It is the day when the “Armaos” brotherhoods go out again and perform their traditional dances. As well as the already mentioned "seashell ", in Bolaños the "Star" is performed – dance in which five-pointed stars are formed -, and "the Mill", where the flag-bearer is in the middle and the rest form a Latin cross.

On Holy Saturday at night the streets turn into a showcase of artisan blond lace crafts, which women wear on their mantillas in all the processions. In Miguelturra, when the so-called “Armaos” mass is over, the brotherhood dramatizes a symbolic fight, in which the flag is waved at the end to symbolize Christ resurrection.

“The Resurrected” and “The Meeting” processions follow one another in all the municipalities at different times. In Pozuelo de Calatrava, Torralba de Calatrava and Calzada de Calatrava the “Resurrectionhallelujah”  traditional romance is sung

If you do not want to miss anything, it is best to check the calatravaparquecultural.es portal, a joint initiative of the Regional Government of Castile-La Mancha, the European Union and the Ministry of Labor, where the visitor will find useful information.