Description of the party Holy Christ of Urda | TCLM 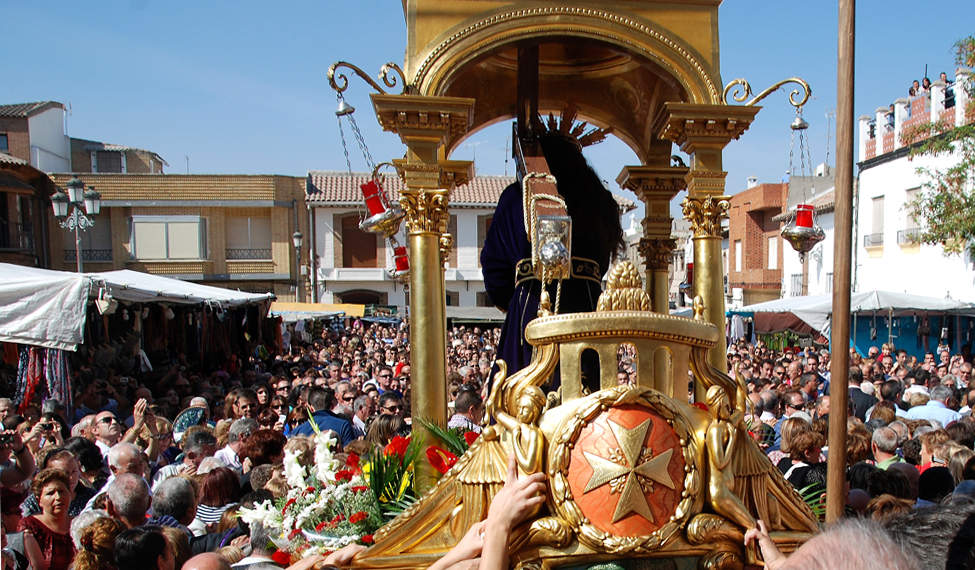 Urda, the village nestled in the foothills of Montes de Toledo mountain range, under the protection of La Calderina, its highest peak, and that opens up, like a metaphor of the spirit that inhabits it, Nature haphazardly tracing a line, to the fields of the plains of La Mancha, celebrates since antiquity its “fair” when fall makes its debut.

These dates, marked in red in the calendar of any person who prides himself in being from Urda, revolve around the figure of the Holy Christ of the True Cross, known better as the Christ of Urda; and imply, apart from the enjoyment of the senses for all who partake, a true manifestation of popular faith, which for having witnessed it is difficult not to be moved.

On the morning of the 28th of September, the sanctuary that houses year long the Nazarene Carrying the Cross, opens its doors and there appears the singular golden boat under the canopy of which rises the impressive figure, this to which the artist Luis de Villoldo gave form in his workshop in Toledo, at the dawn of the Golden Age. This begins the procession of bringing the figure down, which will transport it to the parochial temple of Saint John the Baptist; it consists of a short route that passes slowly, in which the float advances towed by very thick cords that numerous devotees pull, and pushed by the faithful who manage to grab hold of it. The Christ will remain in the parish until the next day and it is there where it can be venerated by the numerous pilgrims who come from near and far, many on foot, to visit it. The incessant murmur, which provokes constant movement, fades with the same rhythm that marks the unspeakable prayers that the Christ of the Boat gathers as the afternoon progresses.

On the 29th of September, Urda always shines with its own light and writes a chronicle of time with understated passionate magic, and it is because it is its big day. After a solemn mass, the serene face of the Son of God, heading to Calvary, leaves again, to fixate His unmistakable gaze on the multitude who desire His grace or give thanks for His blessings. You cannot pass! The emotion takes hold in the streets; the bells toll without rest; there are many people who come out onto the balconies to see the wave of hope through which the ship slowly navigates on dry land; the sounds of fireworks that are fulfilled promises break through the air; the music resounds and is heard, beyond the intimate and silent prayers, caressing the heavens, the litany of the torn “living” with recognizable and moving voices who have been converted, with the passing of the years that the custom changes to tradition, into identifiable signs of the emotional path to return the Christ to his house. His arrival is also unique, when, with much difficulty, it passes through the gate of the foyer and makes a brief stop, amidst the applause of an intense goodbye, before crossing the narrow space that returns Him again to the peace of the chapel.

Thus, it is very possible that Urda with its Christ is kept in a corner of one’s heart, like this place that is difficult to leave and to which one always wants to return.

Festival of Regional Touristic Interest since 2015

From 27 September to 1 October.

See the floral offering of the littlest ones who, on the afternoon of the 27th, dressed in the typical costume, carry their bouquets to the feet of the Christ. When this has finished, you can be present for a demonstration of regional folklore, in which a highlight is the“Jota del Cristo de Urida”.

Also on the 27th, but in the evening, attend theSomene Miserere, sung by the parish choir. It is difficult to find an artistic and religious display of this level in surrounding areas.

Go to “la pólvora”. The nights of the 27th and 28th of September Urda fills with light thanks to the fireworks.

Listen to the municipal music band, it passes through the streets of the town at certain moments and hearing it, it is inevitable to thin that Urda, during these days, know about fairs.