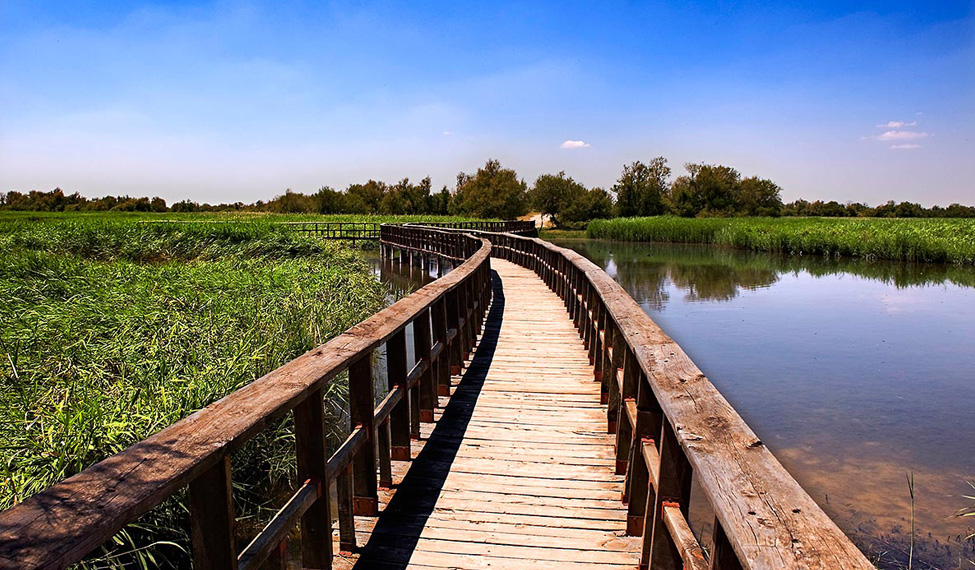 Tablas de Daimiel are wetlands almost unique in Europe and the last representative of the ecosystem called “tablas fluviales”, one characteristic of the central plain of our peninsula. It is a complex ecosystem that mixes the features of a floodplain, produced by Guadiana and Gigüela rivers overflows in its confluence, with one of a large aquifer groundwater discharge area.

These overflows are connected to the development of powerful and characteristic vegetation that is an unique habitat for all wildlife linked to the aquatic environment.

When it was finally considered a National Park, a great step was taken in the conservation of one of the most valuable ecosystems of la Mancha, ensuring the survival of the birds that use these areas as areas of wintering, shedding and nesting, creating a comprehensive zone of aquatic birds.

The waterbirds that live in the area, many of them in large flocks, help us to understand the landscape as an exceptional habitat for birds. Some of these species, such as shovelers, teals or grey herons, among others, use this area to hibernate, fleeing the rigours of Central and Northern Europe; others, on the contrary, use it as a place for nesting and breeding, as it is the case of the pochard, the European pochard, the majority of Iberian Ardeidae (herons, little egrets, cattle egrets, squacco herons, night herons, Eurasian bitterns and little bitterns), the great crested grebe, the little grebe and the black tern. Some of them use it as resting and feeding place on their long migratory journeys, like ruffs, black terns and other waders. There are also sedentary species such as mallards or western marsh harriers that can be seen throughout the year, provided that the environmental conditions are suitable. The amphibians that best characterize the protected area are the green frog, the European tree frog, the Iberian ribbed newt and the common parsley frog. In addition to the 250 species of birds that inhabit the wetland, some fish autochthonous species stand out, such as ides, the squealius albunoides and the cobitis paludica. Regarding the reptiles, we can highlight the European and Spanish pond turtle, the Natrix maura and, in land areas, the montpellier snake, which has some specimens over 2 meter long.  The most representative mammals are the otter, as species best adapted to the aquatic environment, foxes, wild boars, rabbits and badgers.

It is conditioned by several factors such as seasonality of waters, salinity, humidity, organic matter, etc. The most characteristic formations of the National Park include the blue sedge, with some populations that probably make up the largest area with these plants of all Western Europe; something similar happens with the common duckweed, underwater plants that cover the bottom of Las Tablas and are a first order food source for bird life linked to the aquatic environment. The Tamarix, unique existing trees inside the Park, have reoccupied their primitive habitats, for its partial adaptation to water and for their degree of salinity. They surround islands and start the formation of a belt around the protected area. Other plants, such as the bulrush, are beginning to regain their place after having had a hard battle with species like the Phragmites, which, as a result of increased scarcity and short-sightedness of the current periods of flood, adopted an invasive behavior and caused the displacement of others plant communities, including the blue sedge. We can highlight the sea rushes in temporarily swamped soils, several species ofLimonium sinuatum, endemic in saline soils, wetlands from La Mancha and tumbleweed covering some islands

For free every single day of the year.

Summer timetable: from 9h to 21h, but in winter it closes at 18h. The address of the Park is: Carretera de las Tablas, km 10.

The main route to access the National Park starts at N-420 of Ciudad Real road to Puerto Lapice, passing through Daimiel. It is a winding road, which leads us to the Centro de Visitantes del Parque Nacional(National Park Visitors Centre) after 11 kilometres. To get to this centre, there are at least two alternatives, although they are secondary routes, since they pass partly through rural roads.

It is important to know that inside the park you can't: