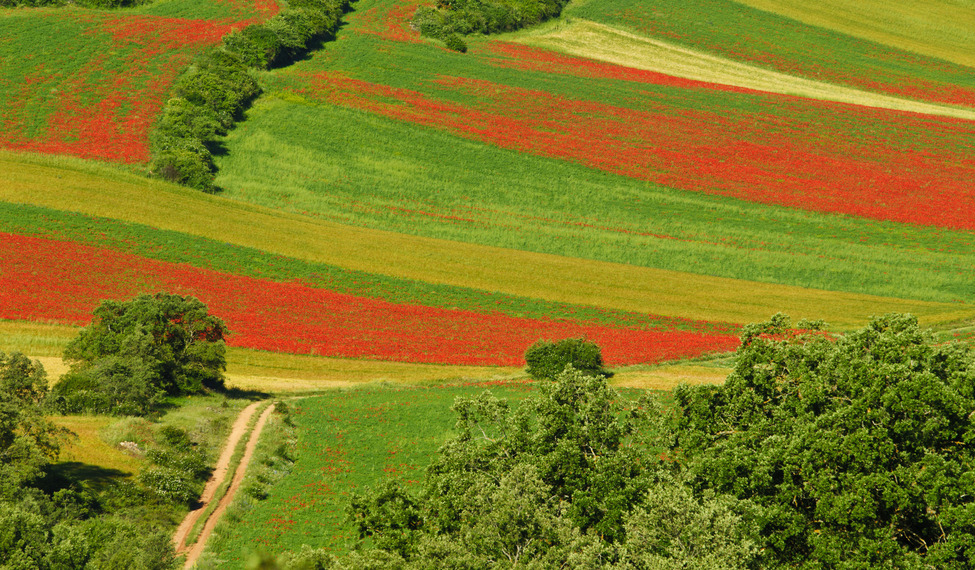 The environmental importance characteristic of the Río Dulce Cliff National Park is derived from an excellent geologic process: the excavation by the river of a deep cannon in powerful limestone layers. During the Mesozoic, Jurassic and Cretaceous eras, the zone was frequently covered by seas that deposited the limestones that now are observed. In the Cenozoic, the fracture and folding of these sediments took place and, more recently, in the Quaternary, the Dulce river has dissolved the limestones and excavated the current canyon that is pronounced through the typical forms of this geomorphological system: enchanted cities, limestone pavements, caves, chasms, sinkholes or tufas that can be observed on the abandoned meander of La Cabrera. The result is a very showy relief that is made up of ample and high moorlands, interrupted by the cut of the cannon of the Dulce river, and also of its effluents, that give rise to seasonal cascades.

Especially suitable for hiking and cycling, it has suitable routes for all publics.

The landscapes formed by their forests and the three towns of the route will leave us a magnificent memory. The forests that cover this Natural Park are fundamentally formed by oaks, with greater or smaller thickness and height, based on the secular advantage of grass and firewoods. Where the ground is scarce, the savins and the junipers arise. At the moment, most of the potential area of the forest in fluvial gallery of Dulce river is occupied by orchards or producer plantations of black poplar. There are as well some spaces with black poplars or poplars, willows and ashs. The atmosphere of the canyon facilitates the presence of more northern climate species, like the maples and snowy mespilus. We can see as well griffon vultures, peregrine falcons and red-billed choughs. In the riverbanks, herons, mallards, common kingfishers and grey wagtails.

The benefit of the natural resources of the Park can be completed with the provided ones by the cultural patrimony, emphasizing the historical set of Sigüenza. The Romanesque style is represented by the precious churches of Jodra, Saúca and Pelegrina, having the latter a wonderful castle.

ROUTES THROUGH THE PARK

Distance: 11 km. (7 km. from Aragosa La Cabrera + 4 km. from La Cabrera to Pelegrina) Approximate duration: 3-4 hours. Difficulty: low/medium by the duration, although it is a plain terrain. Signs: wood markers (mostly in the GR-10, indicated with two parallel red and white stripes ) Recommended for bicycles. Suitable for buggies.

This circular route allows to discover the steepest place of the Park, the Hoz de Pelegrina, with its needles, towers, enchanted cities, stone arches, cascades, etc. Distance: 4 km. Approximate duration: 1-2 hours round-trip. Difficulty: low/medium, although it is a plain route with an only remarkable unevenness of 70 metres climbing Pelegrina, you must wade across the river. Signs: wood markers. Suitable for buggies until the house of Félix.

This route allows to arrive from the medieval city of Sigüenza in the heart of the Natural Park in Pelegrina. Distance: 11.5 km. in the Park (2 km. more from Sigüenza) Approximate duration: 2 hours (one more from Sigüenza) Difficulty: low/medium, by distance. Signs: markers of the route of Quijote.

This 1.5 km route starts in the town of La Cabrera and goes by the right side of the Dulce river. It is a calmed and instructive stroll next to the river, accompanied by a series of adapted interpretative elements of the natural environment for blind people. Suitable for buggies.

Located in Mandayona. An exhibition dedicated to the natural resources of the park, its Romanesque style, the activity developed by Félix Rodríguez de la Fuente in the Park, and cameras for the direct observation of nests of griffon vultures. Routes information: Tel.: (+34) 949 305 948

The Río Dulce Cliff Natural Park extends through the municipalities of Sigüenza (Cabrera and Pelegrina), Mandayona (Aragosa), Saúca (Jodra del Pinar), Torremocha del Campo, Mirabueno and Algora, in the province of Guadalajara. In order to accede to the Park, from the A-2 Highway, we will take any of the access roads to Sigüenza or the CM-1011 in pk. 104, passing through the “Centro de Interpretación de la Naturaleza de Mandayona”, or the GU-118 Highway in the pk. 118, passing through the Félix Rodríguez de la Fuente outlook.

MOST SUITABLE VISIT TIME. What to take

All seasons. Spring and autumn highly recommended. Attention to the snow and the ice from mid-December until March, it can complicate the accesses by highway. Take a bike and a walking stick to enjoy the walk.