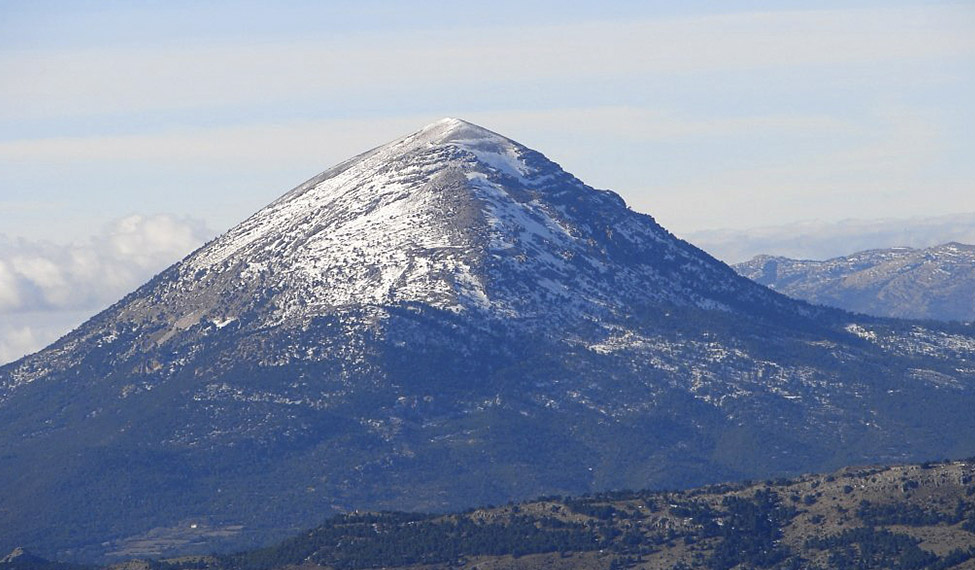 This is the authentic roof of the province of La Mancha. Located in the entrance of the province of Albacete between Jaén, Granada and Murcia, it is surrounded by mountains of great magnitude. Like Atalaya peak, that exceeds 2,000 meters. The views on the ascent of the mountain range leave you breathless. And its peaks are almost virgin.

Geology enthusiasts will be able to observe the evolution of Cordilleras Béticas in the Mesozoic processes. It is very remarkable the geology of Sierra de las Cabras, because you can find samples of many of the geological events that have participated in the formation of Cordilleras Béticas. These mountains are composed of very different units of origin, evolution and formation environment. The variety of rocks is important. Marls, clays, sands and sandstones can be found, although they are the dolomites or limestones, by their hardness, that give rise to the most spectacular forms. Fossils can become very abundant, preserving remains of plants and animals such as hedgehog and molluscs, among which belemnoids stand out (squid-like mollusks).

Those who like to look at the sky will see the griffon vulture, the peregrine falcon, the golden eagle, and the so rare common rock thrush. The list of birds inhabiting the mountain range would fill several pages.

The mammal that presides over the Sierra is the one that gives its name, the Iberian ibex, which can be found climbing the rocks.

It is also important its botanical wealth. It houses at least 36 species of plants included in the Regional Catalog of Threatened Species and 10 plant communities considered Special Protection Habitat.

The visit to Hueco Talón offers, in a simple way, an overview of the space and allows approaching other routes through the peaks of the mountain range. To get there, you have to climb up the pathways of Fuente de la Carrasca. After 1.7 km you will reach the Natural Reserve. From here, you can walk on foot the trail, something less than 3 km, which goes to Hueco Talón. It is an easy journey, bordering the Norte del Espacio and offering a beautiful view of the range. You must cross the pine forest, and towards the middle of the route, you can enjoy the tranquility of the place in Fuente de la Carnina. It finishes in the old Cortijón Talón, from where one can contemplate the alignment of peaks, before beginning the return way by the same road.

From Albacete you will arrive by the A-30 to Nerpio, the nearest town to the entrance of La Mancha in the mountains. From Nerpio, along the A-46 road, which runs parallel to the Taibilla River to Pedro Andrés. 2 km after this village you will find on the left the asphalted road of Fuente de la Carrasca. At 6.7 km you will find on the left the path of Hueco del Talón, that leads to the Natural Reserve.

Good planning is necessary, as well as taking suitable materials and mountain clothes and footwear. Check always the forecast.