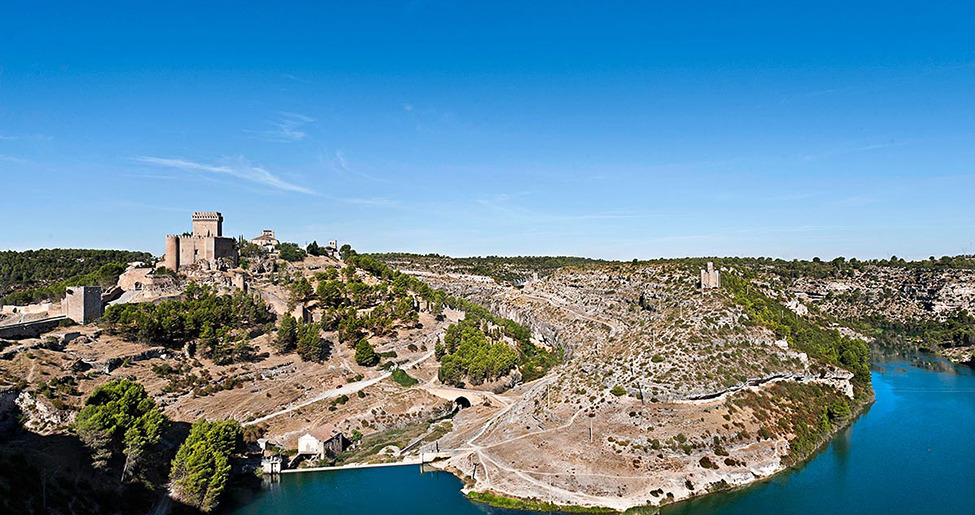 In a deep gorge of the Júcar River, the rock that supports Alarcón rises above the flatland and the gap in the valley. Alarcón is both a viewing point and a natural defence, if ever there was one. It’s not surprising that it was chosen in the past as a place of settlement; its natural moat and its watchtower designate it as strategic at first sight. But it was the Arabs who erected the first fortress and the place name comes from their language.

Its nature, which is haughty per se, was increased by the intervention of man that, with his hands, constructed its viewing points and defences. From the road, the castle draws the rock which scratches the sky, and the entrance to its walled premises submerges us in the cultures that inhabited it and corrected its architecture and its layout without affecting its wall, which is almost intact and can be crossed using the gateways that have been preserved: la Puerta del Campo, la Puerta del Calabozo or la Puerta del Bodegón.

The castle preserves part of its Muslim feel but its subsequent refurbishments are filled with medieval elements which corrected its structure after the conquest. Amongst its towers and defences, the keep stands out. This is present from any corner of the area and unquestionably tops off the picture-postcard. The castle, which has now become a Parador hotel, provides us lodgings and it is the tranquillity that we need so as not to miss out on any of its features, nor those in the rest of the community and the displays of history imprinted on its streets, churches, towers and museums.

Inside the town, on our tour we find a nourished depiction of almost all types of Spanish art. The visits to the Santo Domingo de Silos church, the imposing church of Santa María and the wall paintings by Jesús Mateo in the church of San Juan Bautista are essential.