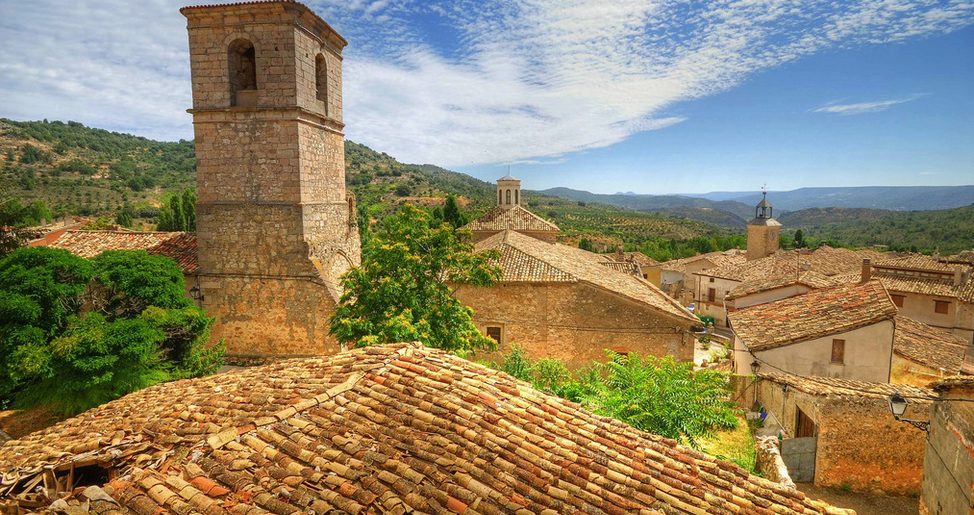 Its privileged position between the plains of la Alcarria and the valley of the Tagus, between the Budia and Entrepeñas dams, shape its beautiful countryside. In addition, it has the honor of being one of the towns in the book “Journey to Alcarria” by Camilo José Cela. As if this weren’t enough, there are various monuments in the town that are worthy of admiration, such as the church of Saint Pedro on calle Soledad and the Main Square, which has a trapezoidal appearance and where the renaissance City Hall is located. The whole urban ensemble is completed with a visit to the Picota, or pillory, upon which we can see four animals, and the Convent of the Carmelites, founded in 1688. Here they keep manuscript letters from Ana de San Bartolomé and Santa Teresa de Jesús.

The main door of the church is one of the best examples of the Plateresque style in the province. As with many others churches, during the Civil War it lost its main altarpiece. Occupying its place is a silver altar frontal generously decorated. On both sides of this altar are two sculptures by Pedro de Mena: an Ecce Homo and a Virgin of Sorrows, both very realist and expressive and in brilliant polychrome.

At the convent of the Carmelites we can see its magnificent facade with an enormous window meant to give necessary light to the choir. It had a big dome, now having collapsed, over the transept. The building was a victim of the violence committed by Napoleon’s troops and of the Mendizábal confiscation.

Access to the church is open to the public. For the convent, it is best to ask in the town.

Get lost and wander around the many noble houses: the house of the Condos de Romanones, the Casa Poyatos, an old hospital, the Casa de la Parra, the Casa del Duende and the Casa de los López Hidalgo. They all bear the noble coat of arms of these illustrious families on their facades.