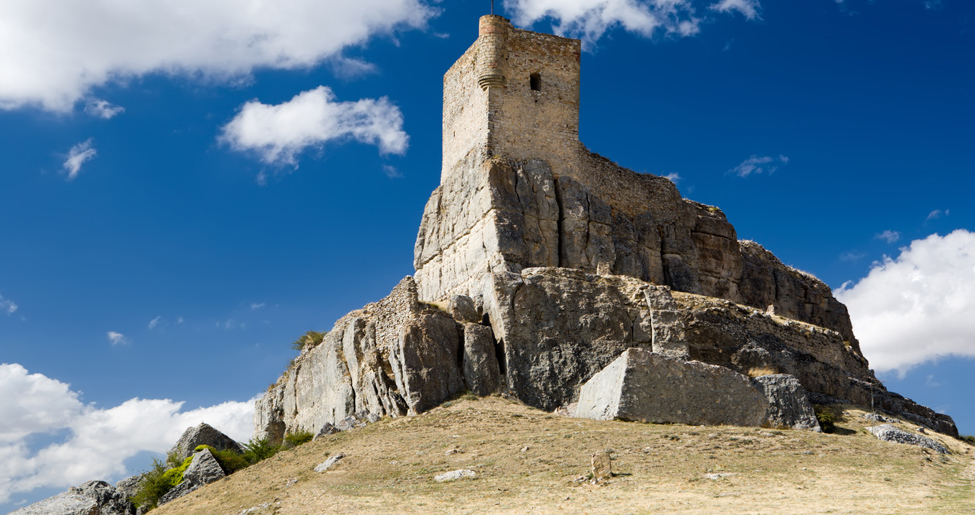 The castle of Atienzsa impresses from a distance: its tower, elevated on top of a rock, is a point of reference for many surrounding kilometers. Not any less spectacular are the panoramic views of the Central System, and of all the surrounding plateau, from its heights.

The best preserved elements of this fortress are, mainly, its large tower keep and the entry gate, with a rounded arch, located alongside a square-shaped turret. In the patio we can find twoaljibes(cistern systems) carved into the rock, one of which still with part of the brick dome that covered it.

The fortress was surrendered for a short time to the king of Asturias Alfonso III in the 9th century. Rodrigo Díaz de Vivar,el Cid, didn’t want to pass in front of it by the light of day, considering it“peña mui fuert”. Alfonso VI would later conquer it for Christian territory, using it to aid himself in the defense of Señorío de Molina.

But the crowning moment in the history of Atienza was led by king Alfonso VIII. The Lara family placed him in the village, placing their trust in the strength of their castle. But the locals, seeing the great army of king Fernando III of León arriving, who intended to seize him in order to reign in Castile, disguised him as a mule driver leaving the city and saved him. Alfonso VIII granted the village with many privileges, and reconstructed their castle and city walls.

In memory of the event in which Alfonso VIII was saved, every year they celebrateLa Caballada de Atienza, and the local people leave the city on the Sunday of Pentecost.