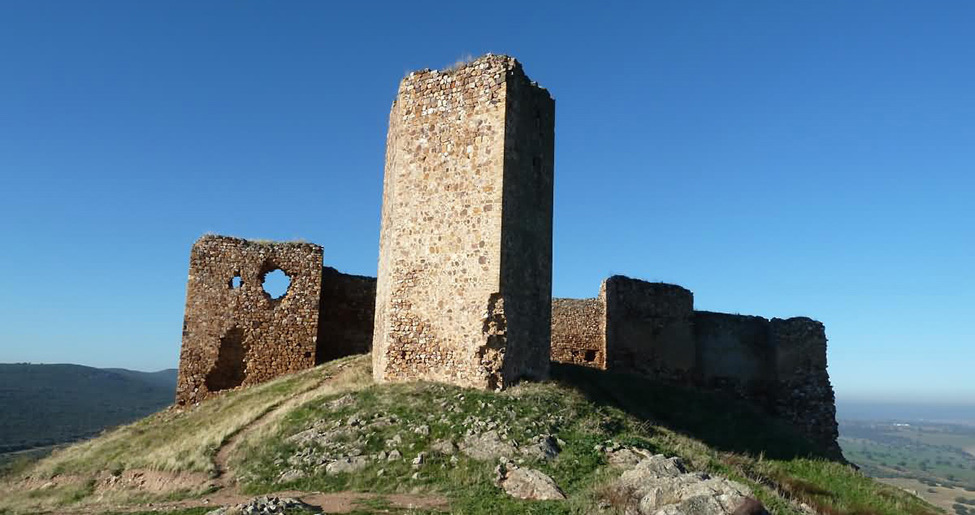 Its large pentagonal tower, erected outside the fortress, ten meters tall, with three interior levels, is the most impressive part of the fortress. TheMonte Nogaleson which it stands shows evidence of having been a location populated since the very early days of humanity, which makes it a top-rated archaeological site.

In Roman times it was likely the ancient mansion of Caracuvium, mentioned in the itinerary of Antonino, converted into a municipality in the times of the Emperor Augusto. During the Middle Ages it was namedCarquer, Caracoi, andKarakuyby Arabs and Christians. Finding itself at an important royal crossroads from Toledo to Cordoba and from Extramadura to Levante, inherited from the old Roman highways, it was a site of continuous conflicts and battles between Muslims and Christians.

One of the oldestencomiendasof Campo de Calatrava is that of Caracuel, founded in 1170 in this castle. Although it still returned to Muslim possession; it would not be definitively conquered until 1212 by king Alfonso VIII.

The pentagonal tower of the castle is very interesting to visit, which covers an even older Almohad tower, made with stucco. Likewise, its square enclosure with towers and the remains of a cistern (aljibe)allow us to get an idea of what it was like to live in these fortresses during the Middle Ages.

The castle is private property and due to its ruined condition, with implied dangers, it’s access is prohibited except with the permission of the owner.

The ruins of the castle are accessed by a path that leaves behind theErmita del Santo Cristo(Chapel of the Holy Christ)de Caracuel de Calatrava. The path consists of narrow stone steps; just as it ends, next to a tree, it veers to the left to go up to the top of the hill towards the castle.

Even today a legend is told of the Arabian queen Clara, who lived in this castle during the Muslim era. The cruel expression of her face gave the fortress its name,Caracuel. It was lost and reconquered many times, until it rested in the hands of the Christians after the battle oflas Navas de Tolosa.