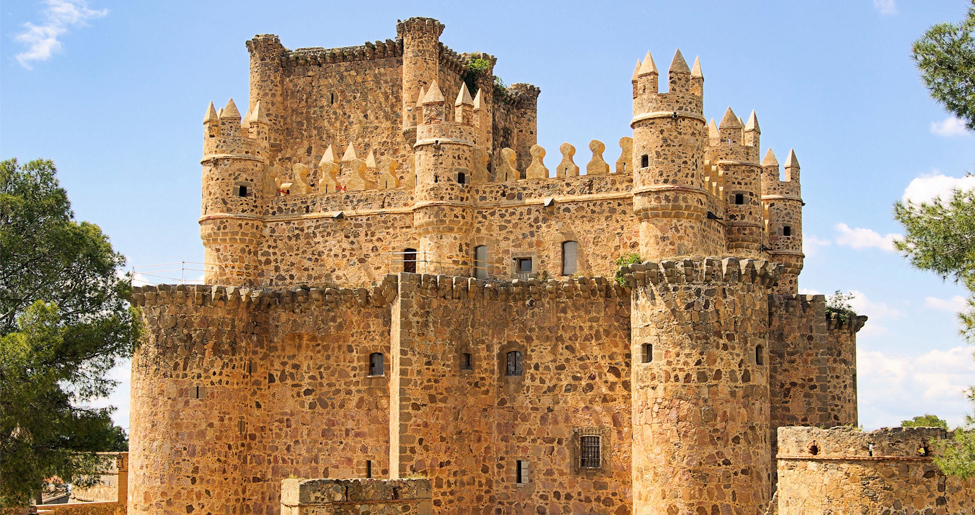 This fortress is a brilliant, well-preserved example of residential castles typical of the Toledo province in the 15th century. Although it is still inhabited nowadays, we can view the exterior, appreciating the aesthetics of the influence of Italian art on its architecture.

Two walled areas and a moat, a machicolation over the door, two small round towers, and the (now gone) drawbridge protect the inner quarters. Attached to the wall angles and panels there are bastions and cylindrical defenses, the inner ones higher than the outer ones. The defenses are designed for artillery, although we can still see medieval loopholes. The pearl and pyramid works of art that decorate it, and the emblems of its original owner, tell us about the Italian-inspired aesthetic trend developed in the 15thcentury. The inside houses an interesting collection of armors, tapestries, paintings and furniture of the time.

Its constructor was Don Pedro López de Ayala, Count of Fuensalida, who built it over a Muslim fortress. It was used by the French troops during the Peninsular War and burnt down. It was restored but burnt down again during the Carlist Wars.

Private property. Visits: Monday, Tuesday and Wednesday from 9.00 to 14.00 hours.

It is necessary to make a reservation in advance and arrive at least 10 minutes beforehand to keep it.

Well-known dignitaries have temporarily inhabited it: the married couple Philip the Handsome and Joanna the Mad, Cardinal Cisneros, the Emperor Charles V, and, as a prisoner, the Princess of Éboli, imprisoned by order of Philip II.