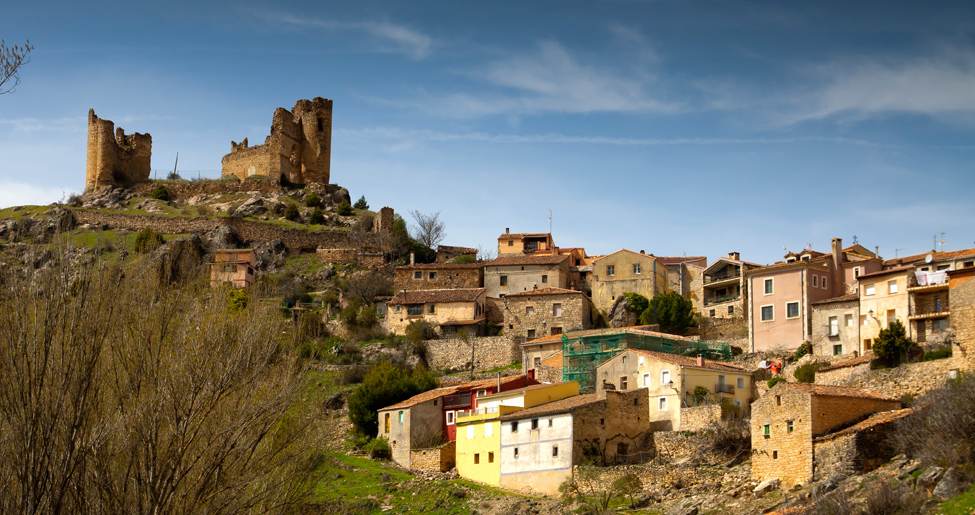 Although there are few ruins, it is worth seeing the beautiful valley of the Dulce River at our feet, and understand the name of the town, from Latinpellas grinae,beautiful view.

It’s position dominates not only the valley of Pelegrina, but also the whole meseta that extends even further, where in the Middle Ages there was the important Roman Road ofEmérita Augusta - now the A2 - which even then was a main road. From its heights one could see, or even communicate with, the nearby fortress of La Torresviñán.

The towers at the corners of the wall are solid, and as such don’t have arrow slits, and their only function was to reinforce the walls. The defense, therefore, must have been carried out from the tops of the walls. Its characteristics lead us to date the fortress to the 12th century.

The castle was property of the bishops of Sigüenza, from which king Pedro I snatched it up without a fight in order to maintain his war with Aragón, and later it was sacked by the Navarrese in the 15th century, and reclaimed in turn by the diocesan militia. Above all, it served as a residence and hunting preserve for the archbishops of Sigüenza.

During the War of Succession, in the 18th century, the aristocrats set fire to it. In the War of Independence it was dismantled by Napoleon’s troops so that it wouldn’t serve as a refuge for the guerrillas fighters of Juan Martín the Undaunted.

Pelegrina is one of the entry points to the Dulce River Ravine, a natural reserve full of beautiful hidden corners, walking paths, and above all to see the griffon vulture that inhabits its crags.