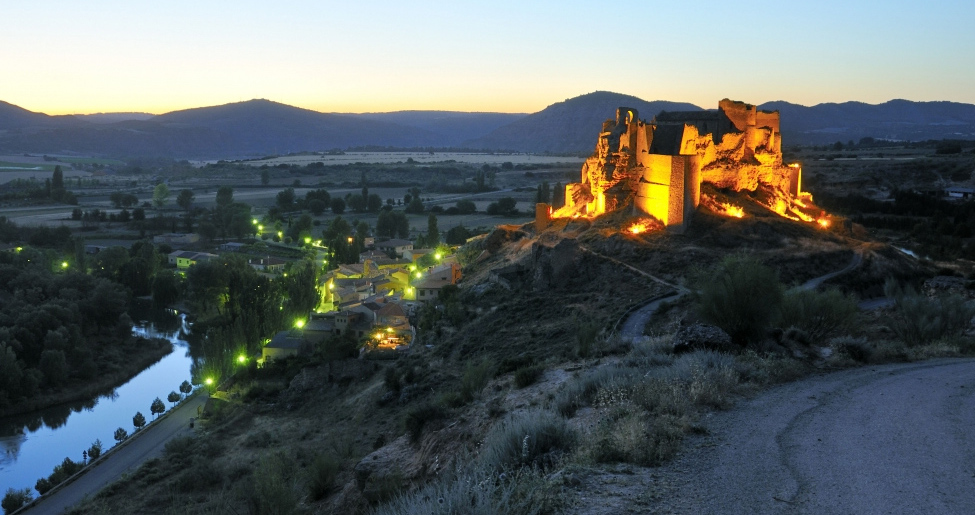 A typical gothic castle whose current form the Maestres of the Order of Calatrava organized, in the interior of which we can see interesting remains from the different eras in which it was occupied. The Iron Door, result of reforms done by the caliph Al-Nasir in the 10th century; the Priory Church of Saint Benedict inside the enclosure; the crypt with a Corinthian Visigoth capital, reused as a baptismal font; the Room of the Moor, covered by a hemispheric dome of masonry; the Espolón Tower, adaptation for the use of artillery, from the 16th century; the cistern; the room of the Omega, with two rooms carved into the rock, a ribbed vault of plaster and a bench running all along the walls; the albarrana (exterior) tower. And all of this, in the surrounding area of the Visigoth city of Recópolis.

The castle adapts to the hill upon which it is built, and is structured around two zones, one ecclesiastic, and the other military. The walls are arranged in a zigzag, a common characteristic of the fortresses in Castile-La Mancha that were ruled over, such as this one, by ecomiendas. The wall that surrounds it appears cut down or dismantled for the most part.

It has two access roads, one that comes up from the valley of the Bodujo ravine, passing the albarrana tower, and arriving at the parade ground. Behind it, a drawbridge, now gone, allowed one to cross the wide moat that we see today.

The other access road is subject to the control of the walls and turrets, arriving at an entry gate with two arches, one gothic and pointed outside, and the other horseshoe, possibly Arabic, inside.

The church has one nave covered with a half barrel arch and refurbished with three transverse arches that are supported upon capitals decorated with plant and geometric designs. To the south of the church we find a patio with a cemetery of knights of Calatrava.

The albarrana tower preserves the inscription Rui Diaz me fecit, era 1328 (Rui Diaz built me in the year 1328).

Additionally, we can see remains of large rooms, cisterns and subterranean rooms.

Its walls still contain materials taken from the nearby Visigoth city of Recópolis. It was originally a Muslim fortress built by the Band Dil-Nun, a Berber tribe who led frequent rebellions against the caliphate of Córdoba. From here they dominated the territory called Cora de Santaver. Alvar Fáñez, deputy of El Cid, and conquerer of Guadalajara, took the fortress in the 11th century, although it would return to the hands of the Almoravids until the time of king Alfonso VIII. The Order of Caltrava, to whom it was given, is responsible for the castle we see today. Its decline began as a result of the Battle of Aljubarrota, lost to Portugal, where three hundred men from Zorita died. The Princess of Éboli would later have it undergo changes to make it more habitable, but finally the Dukes of Pastrana disregarded it, letting it go to ruin.

Al-Rasis, Hispano-Arabic historian in the time of Abderramán III, states in his chronicles that Zorita is strong because it is constructed with the stones of the city of Recópolis. That same city was built by king Leovigildo in 578, to commemorate the birth of his son Recaredo.