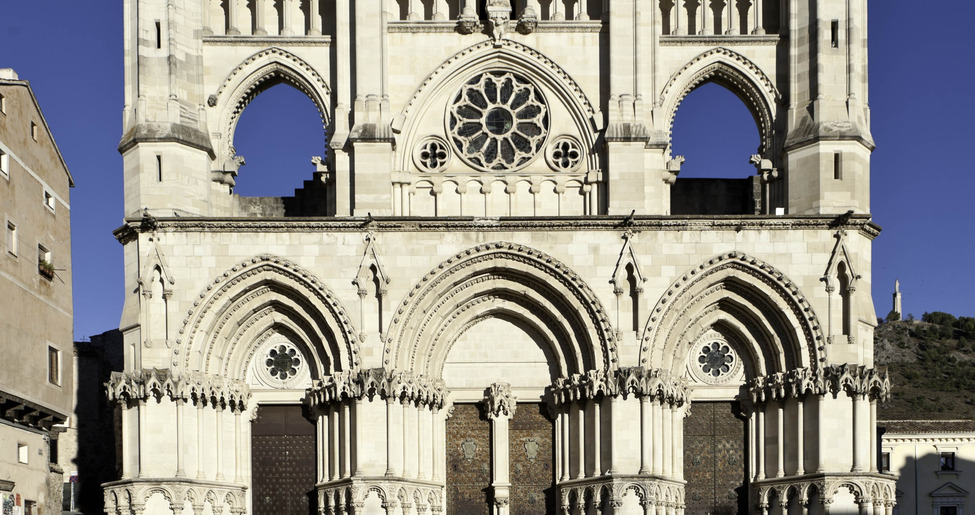 The cathedral was the first building to be constructed after the conquest and it therefore shows all the splendour of the pastoral power. Work began at the end of the 12th century and it has several building phases, refurbishments, extensions and modifications that pepper its clearly Norman-Gothic style with Romanesque relics and later contributions such as Plateresque, Cistercian or Baroque.

Its Neogothic façade from the 20th century (1902) aimed to take advantage of and emulate its original from what was left after the collapse of the Giraldo tower. The cathedral rivals the town hall, without stridency, in the beauty and the serenity of this square which treats the visitor and seduces them.

The cathedral was begun by Gaulish stonemasons between 1182 and 1189 (12th century) and the work continued throughout all of the 13th century. It was safely erected on top of the city’s old Arab mosque. It is considered as the first Gothic cathedral created in Castile.

The first floor of the cathedral was made up of three sections; at the height of the transept it became five sections and continued to make five apses in accordance with the traces from the Romanesque reigning.

In the 15th century, the five apses were substituted by a double retrochoir in order to make use of the development of the five sections that the cathedral had. Its new floor would be made up of a latin cross-shaped floor, three sections, double retrochoir and a deep presbytery. The transept is covered by a large Anglo-Norman influenced central vault.

The chapels on the side sections were mostly built in the 16th century using a Gothic style.

The outside was almost completely refurbished in the 16th century. During the 18th century, both the façade and the towers were renovated, giving the building a Baroque appearance. This renovation affected the main façade, the construction of which was ordered by King Fernando III and which had two Gothic twin towers. The towers on the façade along with another two towers that the cathedral had disappeared during a fire, which led to a new refurbishment that was carried out in 1720 by Juan Pérez and rebuilt again in 1723 under the guidance of Luis de Arteaga.

Then in the 20th century and as a result of the damage suffered by the façade, as the bell tower gave away in 1902 due to a bolt of lightning, its reconstruction began in 1910 and it stands as it is today with a Neogothic façade, the work of Vicente Lampérez. Its current appearance confirms, without a shadow of a doubt, that the work was not completed.

On the top we can find an image of San Julián that rather curiously is the only image that appears on the whole façade.

Monday to Sunday: 10am to 7:30pm.
The ticket office stops selling tickets half an hour before closing.
The closing days are for the San Mateo fair, 24th, 25th and 31st December, 1st and 6th of January, Palm Sunday and the Resurrection, Holy Thursday in the afternoon and Good Friday.

For tickets to the museum, clerestory, concession tickets and other options, see the cathedral website.