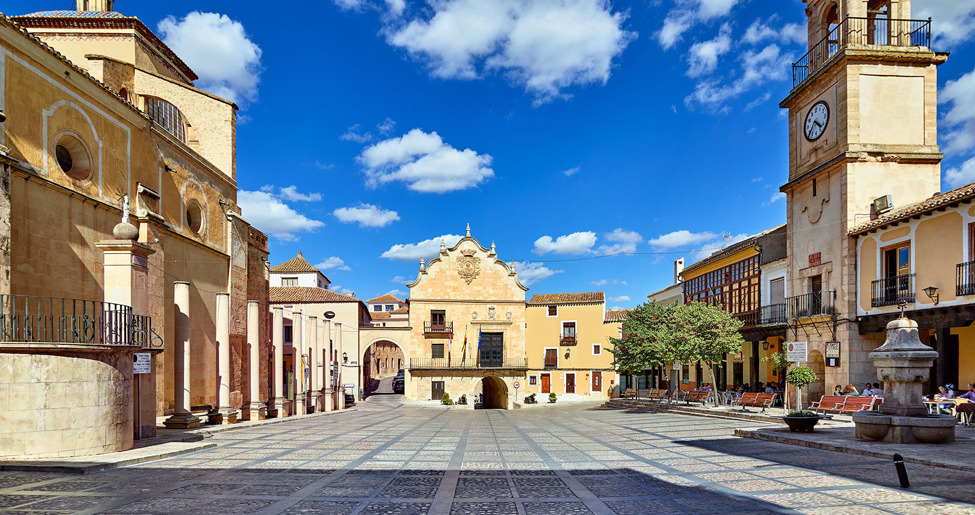 Chinchilla de Montearagón preserves the beauty of its medieval traces. It was declared a conjunto histórico, of national heritage, and on its streets are manor houses in emblazoned stone, a testimony of the old Hidalgos that lived there in other centuries.

Just 13 km from the capital, the castle and the fortress are a historical and visual point of reference which dominates the landscape from the San Blas hill. The castle, due to its strategical location, has Iberian, Roman and Arab settlements, but what we see today on the hill is from the 15th century and after multiple refurbishments, it is in an excellent state. Crowning the rock and bordering the old town, the walls have different heights and from different gateways you are able to take a look inside.

Amongst the religious works, Santa María del Salvador stands out due to its mixture of styles because, behind the Gothic entrance we arrive at a completely Baroque style and as we continue on, we see a beautiful Renaissance-style chancel. The convent of Santo Domingo also stands out and the convent Santa Ana which is a Mudejar temple erected on an Islamic complex and there is also the chapel of San Antón.

Besides the old Arab baths, it is worth listing some of the civil monuments: the palace of the calle de la Obra Pía or the old granary, both of which boast a Plateresque façade; the Tercia house; the town hall with its imposing eighteenth century façade; the Muro house...

Of special interest are the caves at the foot of the wall, framed by white chimneys that divide the outside space whilst the inside is excavated into the rock. On the outskirts we can find the traces of an archaeological past in the Peña Well or the Peñuela deposit.

Its Easter celebrations which were declared of regional touristic interest, date back to 1586.

The highly prestigious Chinchilla Classic Theatre Festival is well renowned and it is celebrated in July.