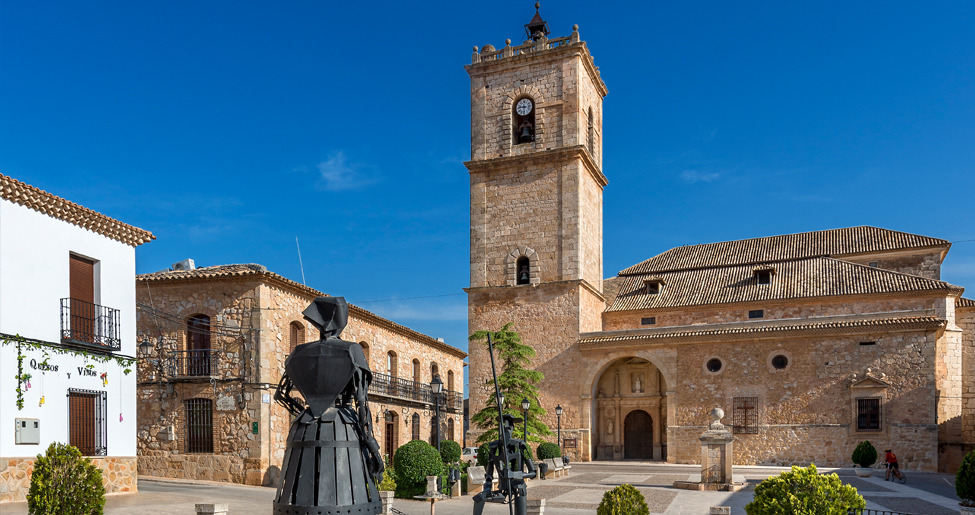 El Toboso owes its reputation and main appeal to the Cervantine novel that attracts visitors from all over the world, like a shortcut to Galdós, following the steps of Don Alonso. Dulcinea leads the way through the streets that feature in the book, as if it were a gymkhana, in order to get to her house, the Museum-house of Dulcinea, the Cervantes Museum or the Dulcinea Museum of Graphic Humour, nerve centres where the essence of the distinguished work of universal literature is compiled.

The area also has many other points of interest, like the Museum-convent of Trinitarias, in a Herreran style and with patios and a Baroque church. Its collection of paintings and images from the 17th century is considerable.  The parish church stands out due to its Renaissance-style doorways and the Gothic ribbed vaulting.

El Toboso unravels itself onto small trails aiming to appease the visitor’s interests: the monumental route, the nocturnal one, the route of the wells and above all the literary route will guide our tour whilst another route, the farewell, will envelop us in nostalgia on leaving the lands of the beloved Don Quixote.

The nocturnal route suggests we tour its white houses, which conjure up sections of the Don Quixote novel. The heritage leads us from the Trinitarias monastery to Dulcinea’s house. Throughout the tour we will see monuments of high significance such as the house of the Mergelinas, the church of San Antonio Abad and the Cervantes Museum. The route of the wells has right of these constructions which are useful for supplying water to the community and watering holes for animals. They date back to between the 16th and 17th century.

Finally, the literary route guides us through the area in accordance with the descriptions made by Miguel de Cervantes in chapter nine of the second part of El Quixote. He himself speaks of the big church tower, amongst other spots, that leads us towards the historical house of Ana Martínez Zarco, who was apparently the inspiration for the author when creating Dulcinea’s character.