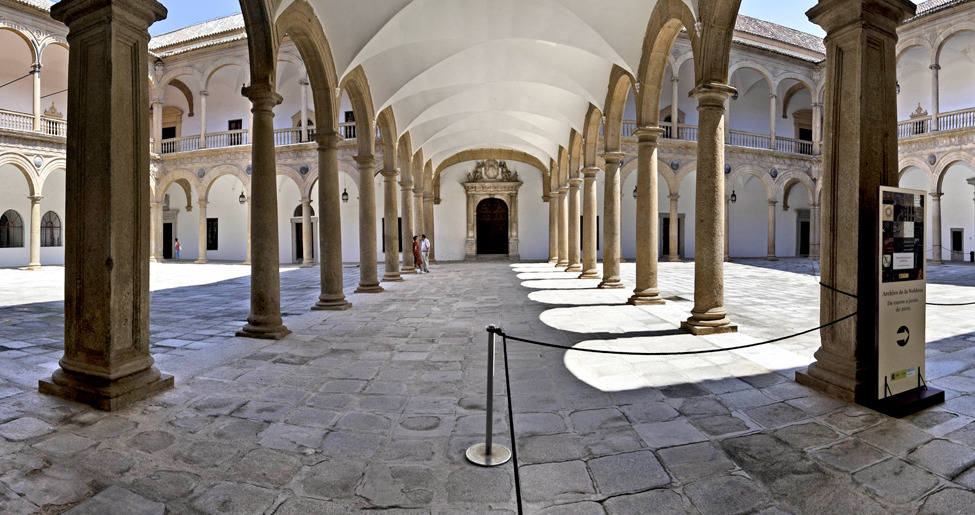 The Hospital of San Juan Bautista is one of the most beautiful and representative monuments of the Spanish Renaissance and in addition it exhibits in a palace ambience an extraordinary pictorial, sculptural and moveable collection from the Spanish Golden Age and the only hospitable pharmacy of that period preserved in its totality.

The first totally classic building of Castilla, also known as “Hospital Tavera” or “de Afuera”, due to its location in the surroundings of the city, in front of “La Puerta de Bisagra”, was built in the 16thcentury with a double function: hospital for those who “were touched by different diseases” and pantheon of his creator, the cardinal Juan Pardo Tavera. Its construction opens, in 1540, the program of the architectonic and urban remodeling which the humanist circle around the Emperor Carlos V projected in order to adjust the image of Toledo to its role of the Imperial Capital.

This building started to be built in 1541, at the request of the cardinal Juan Tavera, in ideological, artistic singular and ephemeral circumstances, what is the reason why it is necessary the distinction between the project that the founder could conceive and the building and hospitable institution finally carried out. The reason of that is due to the extension of the works for more than seventy five years, these latest are the result of the decisions made not by the cardinal but by different executors of his properties and memory in diverse intellectual and artistic contexts.

Once the pieces of land were chosen, the project was assigned to Alonso Covarrubias, master builder in “la Catedral Primada” and Architect of the Royal Alcázares who faced this great work. it was the first time he had a project over a large site with only his knowledge and his imagination. There wasn’t a precedent or even an architectonic preconceived model because, as we have already seen, the social conceptions that gave the origin of the cruciform plant, introduced by the Catholic Monarchs in their general hospitals, had changed.

Covarrubias understood since the beginning, as he shows in his first known plan, that the model which best adapted to the cardinal’s intentions was the large private Roman house of double courtyard described by Vitruvio and he knew through an engraved of Fra Giocondo da Verona. Consistent with this return to the classic models, he refused to the plateresque decoration to put the entire composition to the service of the proportion and symmetry, starting that way the path of an architectural style devoid of ornamentation which will lead to the great sobriety of El Escorial.

The singular spatial richness of the Hospital Tavera is eviden in its courtyards, the long wards of the ancient infirmaries, church, sacristy and crypt allowing us enjoying the beauty of the art works it accumulates such as the cardinal Tavera’s sepulcher, work of Alonso de Berruguete, or the reredos of the church, iconographic project of El Greco.