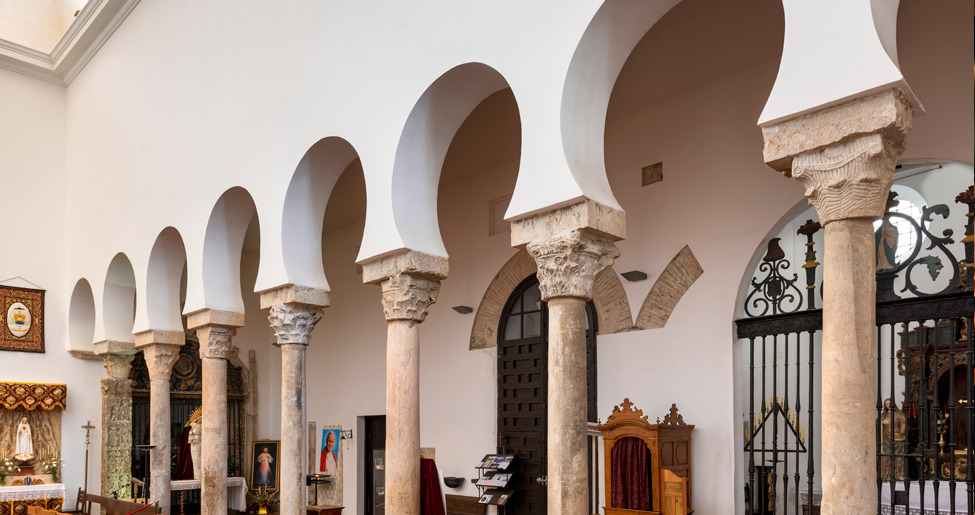 The existence of a building before the mosque has not been proved, since the level of excavation has not gone deep in Visigothic or Roman substrate. However, the great number of Visigothic reliefs forming Roman borders and cornices embedded in the walls is surprising.

The primitive mosque can be considered the oldest one in the city, due to its well preserved equipment and remains, and the second in importance, since it became anAljamamosque after its consecration as a church of the major mosque on the site of the current cathedral in the year 1085, after the conquest of Toledo by Alfonso VI. The remains of the ancient archery of horseshoe arches with a limestone in the keystone, characteristic of Caliphal art, next to the minaret whose equipment resembles the first minaret of the mosque of Cordoba, show an early dating in the first half of the 9th century .

The Visigoth pilaster, Paleochristian for some, from the end of the 6th century or beginning of the 7th, is one of the oldest pieces in which 4 scenes of the life of Christ are represented, who, despite of having his face scraped by the Muslims, can be distinguished by his great size and attitudes: “Curación del Ciego”, “Resurrección de Lázaro”, “Cristo y la Samaritana en el pozo” and “Curación de la Hemorroísa”.

The tower belongs to the mosque minaret, with an added brick Baroque for the bells.

During the last decade of its history, different processes of archaeological investigation have been carried out, with the excavation of the parochial patio, the recovery of the primitive wall covering of the tower, covered in the Medieval and Baroque reforms, the study of the interior walls and, finally, the archaeological excavation of the gospel and central naves, finding the original plant of the original mosque from the 9th century, which encloses a courtyard with cistern and its doors differentiated, as well as foundations and walls of the enlargement documented in the 11th century and consistent in addition of a whole nave whose base is in the current arcade of horseshoe arches.