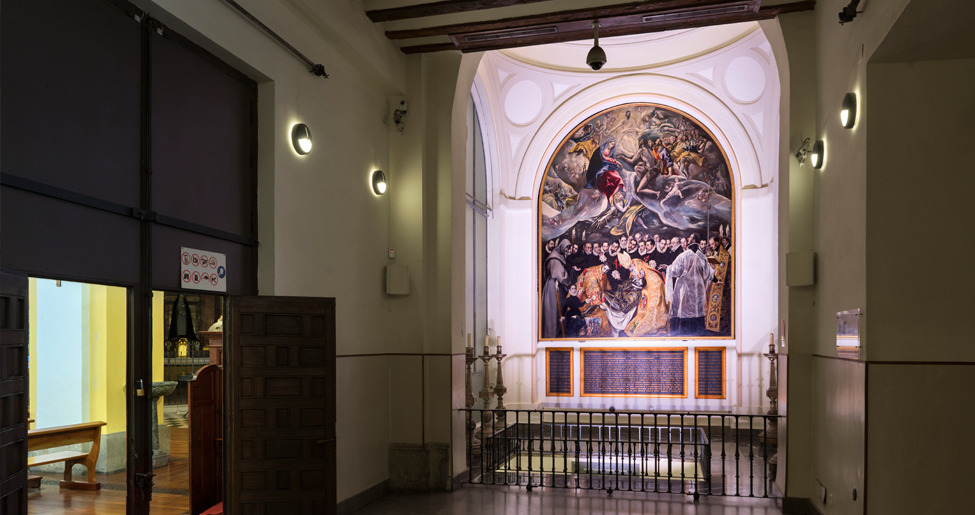 The church is already mentioned in the 12th century, although it was rebuilt at the end of the 14th century by order of the Count of Orgaz, who added the current Christian bell tower to the former Muslim minaret. The tower is one of the best Mudejar exponents of Toledo, with glazed pottery and inlays of a Visigothic niche and a cross pattée.

Don Gonzalo Ruiz de Toledo, notary of Castile and lord of the town of Orgaz, stood out for his generous works of charity, contributing to the reconstruction of parish churches like this one, San Justo and San Bartolomé, and building the church of San Esteban of the Agustinos convent. In his testament he ordered to be buried in this church in the humblest place: the last of the chapels of the epistle nave.

In the back of the parish temple, with entrance through the west door, we can find the top work of El Greco and the universal painting: The Burial of the Count of Orgaz (1586-1588), an oil painting on a 4.80 by 3.60 m canvas which perfectly gathers all the virtues of the brilliant mind of El Greco.

The painting was commissioned by the parish priest Andrés Núñez of Madrid to perpetuate the memory of the aforementioned benefactor. Although El Greco followed the indications given by Don Alonso, the Cretan used his vast knowledge of the Eastern iconographic tradition to convey his own vision on the great issues that make up the painting. Art at the service of a genius; a genius at the service of faith.

In 1975, after a thorough scientific study, the painting received a remarkable restoration by ICROA (Institute for the Preservation and the Restoration of Artwork). In addition to this process, it was disassembled from its original location and placed where it can now be contemplated.

In the interior of the temple, we can also see other works such as a 16th-century plateresque altarpiece and two baroques, a marble baptismal font from the 16th century, a beautiful marble image of the Virgin from the 12th century, three interesting paintings by Luis Tristán and two sculptures of Alonso Cano school.

This monument is within the offer "Tourist bracelet", with which you can visit 7 monuments at the price of 9 €. These monuments are: Santa María la Blanca Synagogue, Cristo de la Luz Mosque, The Burial of the Count of Orgaz, Salvador Church, Jesuits Church, San Juan de los Reyes Monastery and Doncellas Nobles School.