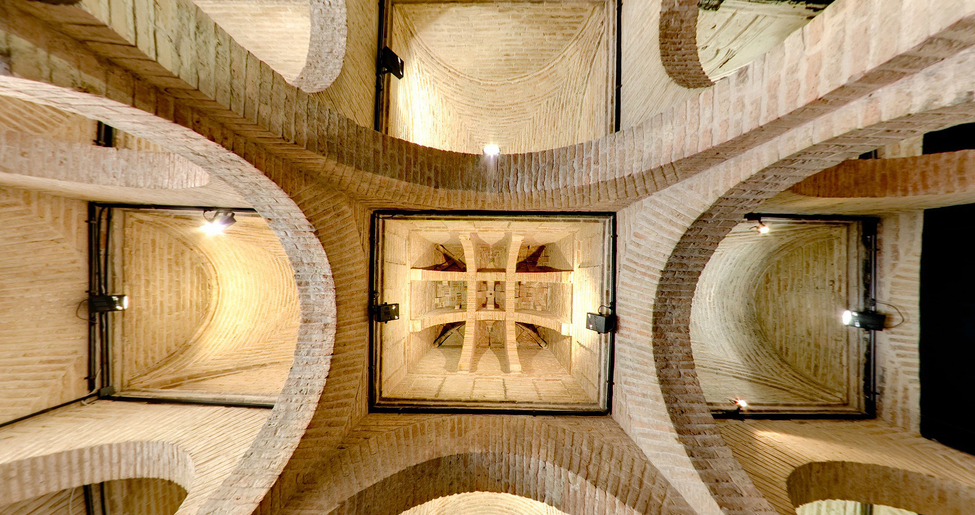 *Visits are not possible nowadays

The chronology places it around the second half of the 11th century. It is located in Arrabal de Francos, next to the Souk (street market) of the shoe pulishers and above the souk of the barterers; in the heart of an eminently commercial district.

The Tornerías Mosque conserved its cult even after being taken by Alfonso XV; it was demystified by the Catholic Monarchs between 1498 and 1505. It has recently held the Centro de Promoción de la Artesanía (Center for the Promotion of Craftworks).

The floor of the Mosque is an irregular square. The space is organized by four columns without bases, in three naves, that generate nine square compartments. All of them are covered by vaulted vaults except for the central one, which has a cruciform structure. The arches are of horseshoe with great variety of proportions. On the side corresponding to the wall of the qiba, the mihrab must have been placed.

What determines the singularity of this building is the unusual fact of having two floors, because of the drop of the terrain. The entrance from the Plaza del Solarejo is practically at the level of the mosque or cult area, and the ground floor of the Tornerías street, composed of three naves subdivided by semicircular granite arches -Roman arches-, opens to the structures of one of the water reservoirs,castellum acquae, which sustain it.