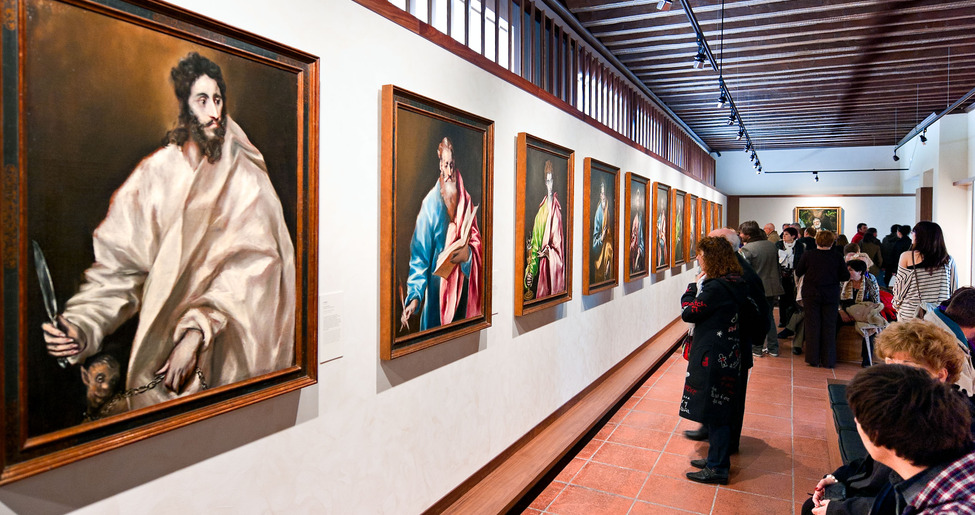 Part of the work of El Greco is inside, of which a magnificent “apostolate”, the “Vista y plano de Toledo” and “Las lágrimas de San Pedro” stand out. The museum is completed with pictures of Luis Tristán, Murillo, Valdés Leal and other artists.

The building was built at the beginning of the 20th century taking advantage of a previous one from the 16th century and a Renaissance palace to gather, in a same space, the dispersed work of the artist. The Marquess de la Vega-Inclán was the one who acquired these buildings and complemented them with furniture and equipment of the 16th century. The Museum was inaugurated in 1912.

In March of 2011 the museum again opened its doors to the public in a renewed seat and with a new interpretation of its collections, respecting the past and betting with force by the rigor and the expositive veracity. The current visit refers to different rooms in the home, although revised from a new perspective, hence its name -museum- changes, overcoming the historicist view and favouring an approach that improves the reception and understanding of the public.

The reopening tries to inaugurate a new stage, a journey that respects the past, but look into the future. The point is to draw new lines of action, betting strongly on the specificity of the institution through its dissemination, but also through research and the needed studies to preserve and understand the legacy.

The museum focuses on the figure of El Greco and the influence of his work and personality in Toledo at the beginning of the 17th century. The new exposition gives, in addition, a well-deserved importance to the history of the “house” and the museum, as well as to the figure of the Marquess de la Vega-Inclán. The aim is to explain to the visitor that he is not in the true “house” of the Greco, favouring at the same time the value of the figure of the Marquess de la Vega-Inclán, as the sole responsible for the rescue of the Cretan figure and founder of the museum that takes his name.

It also includes the Mudejar caves, as a sample from the past of the present museum, and the garden, remembering the figure of the Marquess and its political-cultural personality from the Toledo atmosphere of its time.

Closed:
Closed every Monday, local holidays and on January 1st and 6th, May 1st, and December 24th, 25th and 31st.