The Army Museum (Alcázar of Toledo) 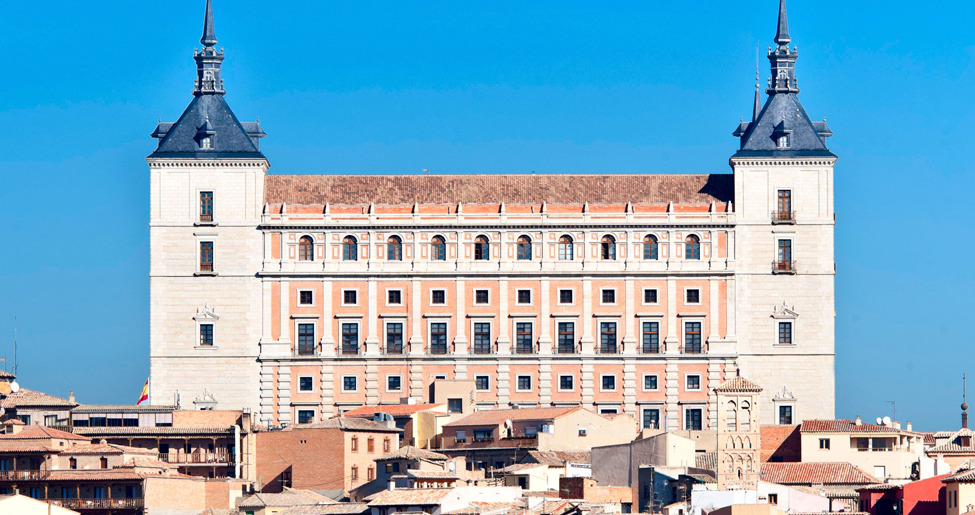 The Alcázar, symbolic building, is located in the highest area of the city of Toledo, taking its most remote origins in Roman times. Located in a strategic point of the city, during the Visigothic period, Eurico conquers the city and Leovigildo establishes therein the capital, leaving modifications and adaptations in the building, considered and originally conceived as a large fortress. During the reigns of Alfonso VI and Alfonso X The Wise, it is rebuilt, giving rise to the first alcázar of square floor with towers at the corners, and a main facade in three sections. In the 16th century Carlos V and Felipe II ordered to erect the Alcázar as such.

The Eastern and Western facades received a simpler treatment, being the main facade where Covarrubias focused the representative and emblematic character of the building. The courtyard, designed by Covarrubias in 1550, is the most classical and monumental piece of the whole that, along with the staircase, designed by Villalpando and built by Juan de Herrera, gives the building a solemnly triumphant appearance, in clear harmony with the proportion and classical monumentality of the whole.

In terms of its historical events, the building has been marked by several (the War of the Spanish Succession, the War of Independence, the Spanish Civil War...), suffering sieges, fires, etc. After its partial destruction during the civil war, a laborious reconstruction began which did not end until the end of the 70s. It was carried out by engineer soldiers and was organized in different stages.

The current image is an imposing building with four facades, each one with a different artistic style and different uses, among others: Infantry Academy, the Army Museum and current Regional Library of Castile-La Mancha. As a Regional Library, we have to highlight its more than 380,000 volumes and special value collections, such as the Borbón Lorenzana, in addition to its status as a cultural site, with excellent facilities and permanent social use.

The Army Museum is located in two buildings: the historical Alcázar and the new plant, connected by the remains found in archaeological excavations made for the expansion.

The Alcázar has been destined to Permanent Exhibition. It is structured in thirteen thematic rooms, in which specific collections are displayed, and eight rooms of historical path that presents a chronological journey through Spanish military History.

The new building holds the Temporary Exhibitions room, the room of The Army at the present time, administrative dependencies, the classroom, the auditorium, the archive, the library, the cafeteria, restoration workshops and stores, all of them equipped with the greatest technical advances for the conservation, restoration, cataloguing, research and dissemination of funds that are kept.

General ticket: €5 (under 18, for free)
Ticket + audio guide: €8
Reduced ticket + audio guide: 5.50€
Reduced Ticket: €2.5 to groups linked to cultural or educational institutions. The price will be unit for all the members of the group, depending on the characteristics of it (pensioners, adults, children, etc.).

Free tickets: on Sundays, on March 29th, April 18th, October 12th and December 6th. Pensioners from the EU. Disabled people with disability equal or more than 33% and companion, when the latter is necessary so that the first one can make his visit. University students in the EU. Unemployed in the EU. Large families members.