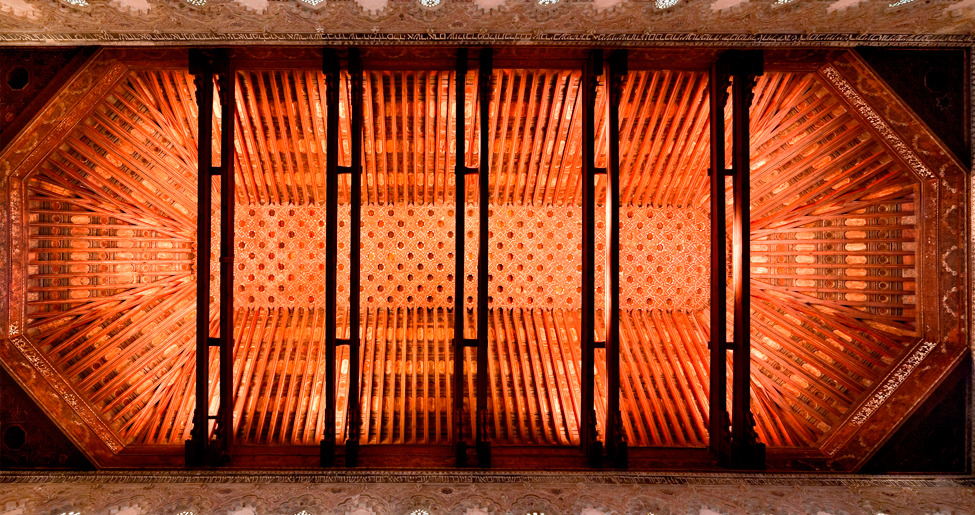 The Sefardí Museum was created in 1964, located in the most important Hispanic-Jewish building in Spain: the Samuel ha-Levi Synagogue or El Tránsito Synagogue, located in the old Jewish quarter of Toledo and considered the most beautiful and best conserved medieval synagogue in the world. The masterpiece of the museum's collection is its own headquarters: the Synagogue.

In 1968 the Sefardí Museum was declared "National Museum of Hispanic-Jewish Art".
In 1969, El Tránsito Synagogue was disconnected from the Vega-Inclán Foundations (an organization that had managed it since the beginning of the 20th century), starting its journey as an independent center.

On June 13th 1971, the museum opened its doors to the public. The rooms of the museum occupy the spaces of the old archive of the military orders of Calatrava and Alcántara.
Since then, museography has evolved through various reforms. The last phase, carried out between 2011 and 2015, includes the adaptation of the permanent exhibition to people with visual and hearing disabilities, as well as the process of sanitation and adaptation of the ornamental covers of the Great Hall of Prayer.

The exhibition aims to rescue from oblivion and unveil the mantle of silence that shed on Jewish culture in Spain, from its expulsion to today. Therefore, the expository script does not intend to finish in the mythical year of 1492, but it reaches the present time, focusing on the exile and development of the Sephardic communities throughout the world.

It was built on the orders of Samuel-ha-Levi Abulafia (almojarife in the court of King Pedro I of Castile), between 1355 and 1357, as a private chapel of the palace which, in a gesture of constructive grandiloquence, had ordered to rise on a great extension next to the Tagus and whose limits reached until the very edge of the river.

The synagogue, thought to be the oratory of the palace, which it communicated directly with, is the only structure that has survived it.

Its simple design in floor plan is similar to many chapels of Christian palaces and castles of the time, although by the remarkable elevation of its walls it stands out over those ones because of its interior space of clarity and cleanliness of unsurpassable geometric. It is covered with a rich wood coffered ceiling from larch tree that has inlays of ivory and painted decoration.

As in Santa María la Blanca, the external austerity contrasts with the decorative sumptuousness of inside, so linked to the feeling of "horror vacui" of the Oriental peoples; that is to say, a fear of emptiness that leads them to completely cover the wall with rich and overflowing decoration.

In Santa María del Tránsito, the ornamental cover is made of works of Mudejar style plasterwork made with exceptional care. The ornamental theme scrupulously sticks to heraldry and epigraphy, and there is no figure as man or animal, following the precepts of the Mosaic law. In it we can contemplate the shields of Castile and Leon, under texts in cartlas runs along the frieze extolling the figures of King Pedro, of Samuel Levi, who is described as a man of fight and peace, great builder, and of his architect, Rabbi Don Mayr, interspersed between Davidic psalms and praises to Yahveh, in appreciation for the protection received.

The front of the east wall is profusely decorated with "ataurique", vegetal decoration of Arab creation. In the south wall we can still see the gaps destined to hold the wooden beams of the tribune reserved for women, from where they attended, hidden and separated from men by lattices, to the acts of the liturgy.

The various historical vicissitudes have made it a church, archives of military orders, hermitage and, finally, Sefardí Museum. It all began in 1492, with the expulsion of the Jews. The Catholic Monarchs gave it to the Order of Calatrava, which made it a church, hospital and asylum until the 16th century in which it just remained exclusively as a church and in the 18th century as a hermitage, due to the decadence of military orders, to the disentailment. It was declared National Monument on May 1st 1877, and measures were taken to alleviate the poor state of the building and the first decorations were carried out.

The rooms of the museum occupy the spaces of the old archive of the military orders of Calatrava and Alcántara.

General: €3
Reduced: €1.50
In which cases is the reduced rate applied? A reduction of 50% on the entry price will be applied to:

a) Groups consisting of 8 or more members, upon request.
b) People performing cultural voluntary work, by presenting the corresponding accreditation.