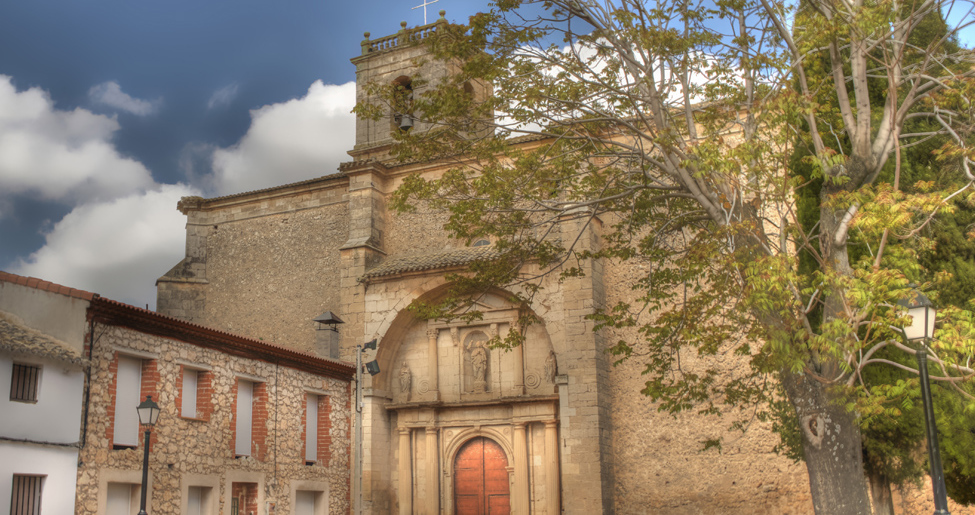 At the border of la Mancha Alta with the la Alcarria region in Cuenca, we find, 52 km from Cuenca, the lovely town of Palomares del Campo. Its location in a plain through which the Jualón River flows gives the municipality an admirable beauty, which grows even more if we visit the church of the Assumption and the hermitage of the Virgen de la Cabeza.

As mentioned, Palomares del Campo has two beautiful treasures. The first of these is the church of the Assumption, which displays a large variety of styles throughout it, from the Gothic until the Baroque, passing through the Renaissance. It also has a large tower visible from a distance for its three sections, and it welcomes us to the town.

In the interior, its diaphanous space consists of only one nave, along which we can see, in the chapel of los Alarcón, a magnificent 17th century altarpiece with a beautiful painting of the Immaculate Conception in the center. Among the valuable pieces the church has, we can highlight the Medallion of the Ascension and a carving of Saint Quiteria. The second treasure of this town is the hermitage of Santa María de la Cabeza. Here, the traveler will be impressed by its 17th century Baroque Main Altar. It has lovely carvings of the Lying Christ and Jesus with the Cross.

Freely accessible, respecting the hours of worship. In the case of finding them closed, inquire at the City Hall.

Between visits, don’t forget to also enjoy the warmth of the streets and townspeople with whom you can fraternize and who will explain to you first hand the charms of the town. Ask them to show you the deserted Fuente del Pez (Fountain of the fish), where remains of the castle of Saint Michael are still preserved.