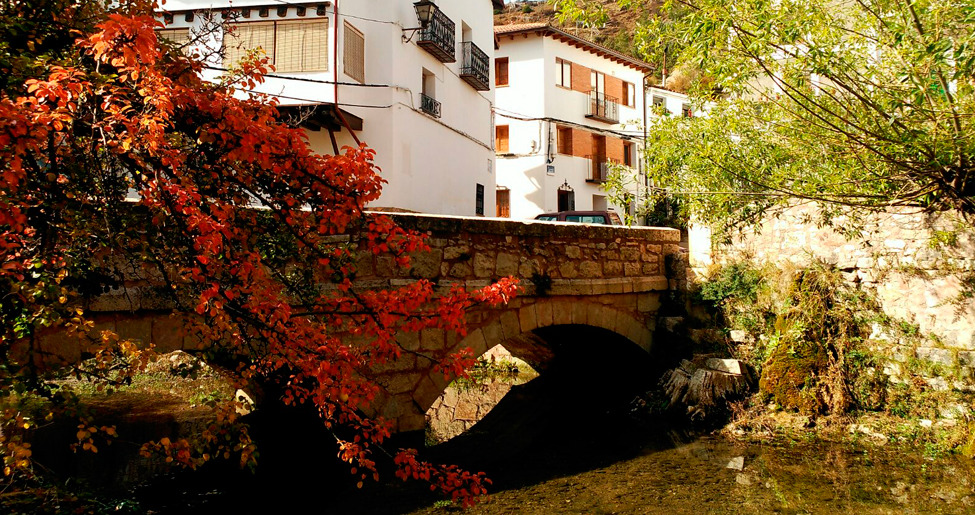 Situated in the upper course of the Cabrillas River and nestled along the cultural route of the Way of El Cid, we find the town of Checa, whose urban complex is characterized by the great quantity of bridges that surround the town and its magnificent Main Plaza.

Plaza de Lorenzo Arrazola, presided over by the 17th century City Hall building and the Transhumance Museum. The noble houses are the highlights, true to the architecture of this area. Standing out among them is the House of los Pelegrines. The tourist can admire its lovely balconies and the noble crest of its facade. Behind the fountain, the waters of the Genitoris River run, flowing down and creating a beautiful waterfall. The square owes its name to the famous Don Lorenzo Arrazola, born in Checa in 1795. He became a very relevant politician and lawyer in the mid-19th century, during the reign of Isabella II. He was State Minister six times and President of the Council of Ministers of Spain (Prime Minister) once.

Plaza Tiro de Barra, in which the ancestral and noble house of the Counts of Clavijo stands out, now called La Gerencia (the management), due to its acquisition in 1908 by the Electric Company of Sierra Menera to use for its offices and administrative headquarters. It is a 16th century building with beautiful forged finishings and the crest of the Counts of Clavijo. Currently, the building houses the Hotel La Gerencia, an idyllic setting for a few days of rest.

Plaza de la Iglesia, in which the notable building of the Church of Saint John the Baptist (17th century, of Romanesque origins and seated atop a great sandstone rock, stands out. Behind the church is the ravine leading to a lookout point from which you can observe the formations of red sandstone. And below the lookout, we find the Barrio de los Usos (Barrusios) possibly the oldest neighborhood, with beautiful nooks where the houses are attached to the sandstone rocks.

From the plaza of the City Hall, crossing the bridge, the visitor can access some stairs from which you’ll have a beautiful view of the first of two waterfalls that form the river as it passes through the town.

In addition to a visit to theTranshumance Museum, the visitor should not leave here without a stroll through the alleyways surrounding these plazas where you will find beautiful areas to spend an enjoyable time.