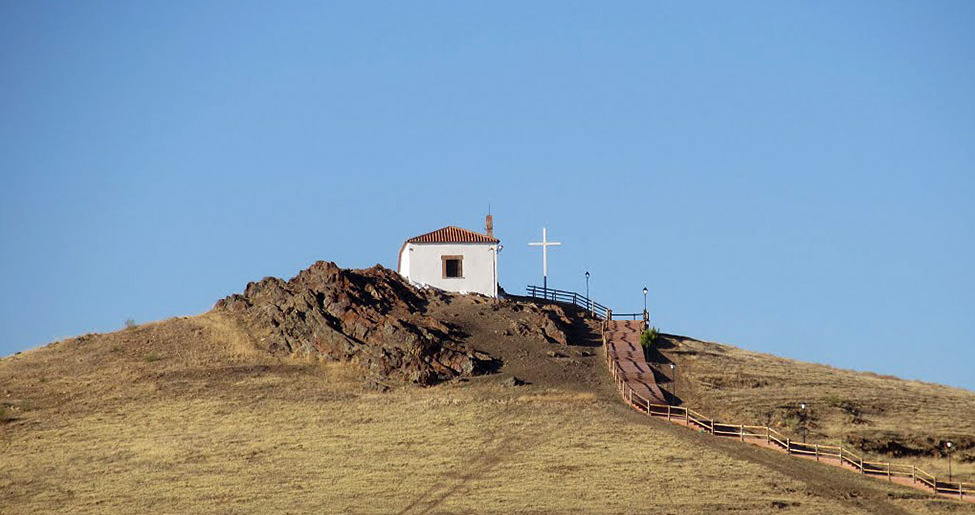 In the middle of the region of Sierra Moreno we find the very old town of Santa Cruz de Medula, born of the medieval repopulations carried out by King Alfonso VII after his victory over the Almohads in las Navas de Tolosa. At 76 km from its capital, it proudly displays both to its own people as well as foreigners its most beautiful buildings, among which the highlights are the church of the Assumption, the house-palace of Carlos Ortega and the hermitage of the Virtues, among others.

Among the religious buildings, the late Gothic church of the Assumption stands out. It has been declared an Asset of Cultural Interest and is one of the biggest temples of the province that houses treasures worthy of being admired. For example, its lovely facade with Renaissance elements, the main altarpiece with the image of the Virgin of the Assumption, and the crest of the Marquis of Santa Cruz.

Upon leaving, look up to see its majestic 46 m tower, divided into three sections, separated by imposts. Surely the tower observes with passion the beautiful hermitage or sanctuary of the Virtues. It is from the 14th century, although its magnificent mudejar coffered ceiling is from the 15th. In its only nave, the Main Chapel is highlighted, covered by a vault decorated with paintings of the Immaculate Conception with a dragon at her feet next to Saint Michael. The pendentives that support the vault are also decorated with paintings. The altarpiece is a copy of the one destroyed in 1936, in the Churrigueresque style. Behind the main altar we find the alcove with fresco paintings by Antonio Palomino, considered some of the best of the Baroque frescos in the whole province. In all, this hermitage will be an unforgettable memory for its beauty.

Regarding the non-religious architecture we can’t forget to mention the palace of Don Carlos Ortega, located in the Plaza de Andrés Cacho. The most striking aspect of this 16th century house is the crest of the Nieto family on the door and that of the Holy Inquisition on the facade. Inside it has a lovely patio as well as a chapel.

Respect the hours of worship in the religious buildings. For the house-place, inquire at the City Hall or the Tourism Office.

Santa Cruz de Mudela has one of the oldest bullrings in Spain, that oflas Virtudes. Built in 1645, it is the only one with a square shape and it will amaze all those who come to see it.