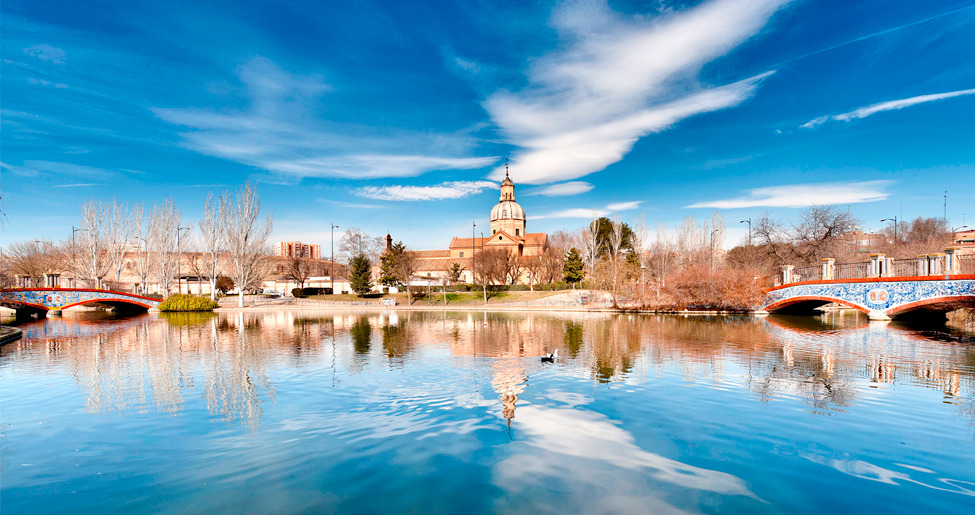 Talavera de la Reina is the most populated district in the Toledo region and the second of the autonomous community, only surpassed by Albacete. As such, it’s a nerve centre in the social, economic and service area for nearby counties such as Campana de Oropesa, La Jara, Sierra de San Vicente and also, for places in the Tiétar valley (to the south of Ávila) and in the north-east of Extremadura.

The city spreads across the eastern banks of the river Tagus. The river Alberche, which flows some 4 km to the west, is also within the municipal district.  Without any doubt, it’s most distinguishing physical factor is the river Tagus, which acts as a natural geographical barrier and in the past could only be saved by few places. In one of them, the defensive fort was erected which meant the beginning of what is currently its urban area.

Talavera appears in its own right in the year 181 B.C. in the writings by the Roman historian Tito Livio. Talavera’s place name keeps changing: in Roman times it was called Caesarobriga. In the 3rd and 4th centuries it was an agrarian, farming town where worship was paid to the Roman goddess of wheat Ceres, and there was the presence of Roman villages such as Saucedo in Talavera La Nueva and the appearance of the first known Talaveran potter, Calvinus, who made cups decorated with Hispanic figures or motifs.

From the Visigoth period of Talavera, Élbora or Ébora highlight the gift that Liuva II gave to Talavera of an image of the Virgen del Prado in 602, and so too the festival in honour of the Goddess Ceres, the traditional and ancestral Mondas, is christianised and the procession walks, since then, to the Virgen del Prado. The Mondas Festival, declared of tourist interest, takes place each year during Easter week and the Talaverans celebrate the yearly harvests in this agrarian, farming area which is overlapped with dales.

From the summer of 713 until the conquest by King Alfonso VI in 1083, the Muslim Talavera (Talabayra) knows growth and enlargement with the building of the first of the three walled enclosures that Talavera has had. It was distinguishable by its 16 connected watchtowers, fortified defence bastion as well as watchtower, and a centre piece in the emblem of Talavera.

Alcázar is also owed to the Muslim rule; a palace which belonged to Maria of Portugal, who, on marrying King Alfonso XI in 1328, received the rule of the city from the king, that since then went on to be known as Talavera de la Reina. It is in 1369 that Talavera became part of the Archdiocese of Toledo. Part of the second area of the wall lives on, starting in calle de Carnicerías street, and next to it is the Puerta de Sevilla gate (an opening made in the wall by cardinal Quiroga in 1579 to facilitate the entrance to merchants due to the failure of the Puerta del Río gate), the Torreón de Zamora tower and the remains from the Plaza de San Miguel square. The old Roman Bridge, el Puente Viejo, was destroyed by the Arabs as they fled Talavera and its reconstruction was ordered by Archbishop Pedro González de Mendoza in 1483. He took advantage of some Roman stock and rebuilt in in the same style, which is part of the reason why it is still known as the Roman Bridge.

In the 13th century, King Alfonso X “El Sabio” conceded Talavera with the privilege of “changing livestock and price adjustments and everybody who enters into these dealings be safeguarded by the council”.

King Alfonso X’s son and successor, Sancho IV, granted Talavera royal privilege in 1294, and the interesting, historical document is preserved in the municipal archive: “let there be markets in Talavera from now until forever”. This paved the way for the creation of the corn exchange, a public house for buying and selling goods and around which inns, businesses and negotiation points were set up which have since provided the city with character. Towards the end of the 19th century, the surge of farming fairs in May and September, with the bustle of people and cattle that were involved, forced the edges of the city to be expanded and there was the appearance of new neighbourhoods. The train line Madrid-Talavera-Cáceres-Portugal contributed to this great development. Nowadays, the National Cattle Market, located at Km 123 of the E-90 motorway which was inaugurated in 1994, implements the highest quality in technology and services which has allowed it to become part of the European Network of Markets.

During the 15th and 16th century, the markets of Talavera experienced a huge peak, coinciding with the birth and activity of some of its most famous neighbours such as Fernando de Rojas (immortal author of the major work in Spanish comedy theatre “Calisto y Melibea”, in other words, “La Celestina”). He was a member of the council for many years and he even became the Mayor of Talavera. Brother Hernando de Talavera, confessor and royal advisor, who in 1487 governed the “Junta de Salamanca” council to analyse Columbus’ projects. The great musician Francisco de Peñalosa. The famous lawyer, Brother García de Loaysa and the distinguished Father Juan de Mariana, royal reporter of Felipe IV and immortal historian, whose statue can be appreciated next to the current town hall in the work by the sculptor Eugenio Duque.

Along with the reaffirmation of Talavera as a hub of markets and business in the 16th century and coinciding with the arrival of Jan Floris to the city to carry out the tiling on the citadel in Madrid in 1562, the Talaveran potters initiate what will be their Golden Age of pottery in the 17th century. Talavera was a city that, due to its quantity, quality and variety of ceramic production, it started to become known as the City of Ceramics and its pieces were requested from both inside and outside of the Crown of Spain.

Pottery making, as well as all of the daily life activity in Talavera were affected by its participation in the Independence War against Napoleon’s army. On its soil the Battle of Talavera took place in 1809.

Later, pottery making remerged in the first third of the 20th century thanks to a famous potter, Juan Ruiz de Luna, who, along with other master craftsmen, increased the technical and artistic quality of Talaveran and Spanish pottery through knowledge, study and experimentation of different traditional and contemporary materials and techniques. Craftwork, and more importantly, pottery, still is a part of life in current workshops where the potter’s good work continues to be a trademark image of Talavera. Other important craftwork is leather work carried out by saddlers, furniture production and wood carving, amongst other crafts that are still done with great expertise.