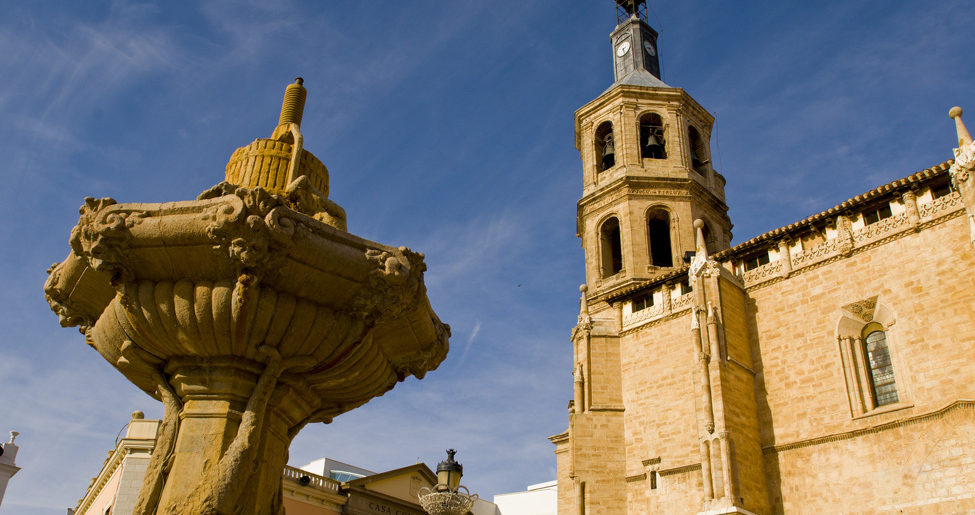 Valdepeñas is one of the most important cities in the province of Ciudad Real. It is located to the Southeast and close to the Sierra Morena. In 1949 the borough called Consolación was annexed to its municipal district. In all, it has more than 30,000 inhabitants. Honoring its rich history, the municipality has several focuses of interest for its visitors, emphasized by the great beauty and patrimonial value of its religious buildings, of which we will highlight a few, and without forgetting its urban ensemble with the Plaza de España being the heart of the life and commerce of the city.

The current appearance of the Plaza de España comes from the end of the 18th century and beginning of the 19th. Its arches serve as support to historical facades decorated in white and indigo, which gives the ensemble an unparalleled beauty. From the plaza we can take a look at the main buildings of the city, such as the City Hall, the church of the Assumption (which we’ll describe later), the Market, and a central fountain that portrays a wine press, the main wealth of Valdepeñas. In addition to the plaza, axis of the city, in the rest of the urban area there are   interesting houses built in the era of the city’s greatest splendor, the late 18th and early 19th centuries, where we will find various examples of modernist houses such as the Cruz house, Izarra house, Ruíz Paved house, and the La Confianza Casino.

We have said that in Valdepeñas the religious architecture is a special feature, and so its churches are worthy of visiting for all who come here. The most important is the church of the Assumption, declared an Asset of Cultural Interest and built upon the remains of a Muslim fortification. Its current appearance comes from the 15th century. It has two naves, a longer main one and that of Saint Lawrence. And two beautiful facades, that of the Sun in a Gothic Isabelline style, and that of the Catechumens, decorated with the Franciscan cord, shells and rosettes. Inside, six panels of its ancient altarpiece, destroyed in the Civil War and attributed to the Renaissance painter Hernando Yánez de la Almedina, stand out; as does the carving of the patron, the Virgin of Consolation, work of Gregorio Prieto.

Second in importance is the church of the Trinitarians. It was part of a convent and was built between 1615and 1623, following the Jesuit model. It has a Latin cross floor plan and choir at the foot of the building. The ceiling is a vault with lunettes. Joined to the transept is the chapel of Jesús Rescatado. Here we can observe the contrast between the simplicity of the church and the excessive Baroque of this chapel, decorated with golden brackets and mural paintings of angles, garlands, scrolls, etc.

Also of great beauty are the hermitage of la Vera Cruz, built upon an old synagogue in the 16th century, used now as an auditorium; and the church of the Santo Cristo de la Misericordia, declared a historic-artistic monument of local interest.

Consult the visiting hours at the City Hall or the Tourism Office. In the case of the religious buildings, keep in mind the hours of worship.

Just 7 km from the city we can visit the Iberian settlement of Cerro de las Cabezas (hill of the heads), which dates to the 7th century B.C. Its remains are protected as an archaeological area and you can visit them. It also has a Center of Interpretation.

Lets not forget the museum offerings that we can enjoy in the city center, were we have the Museum of Wine, the Municipal Museum, and the Museum of the Gregorio Prieto Foundation.