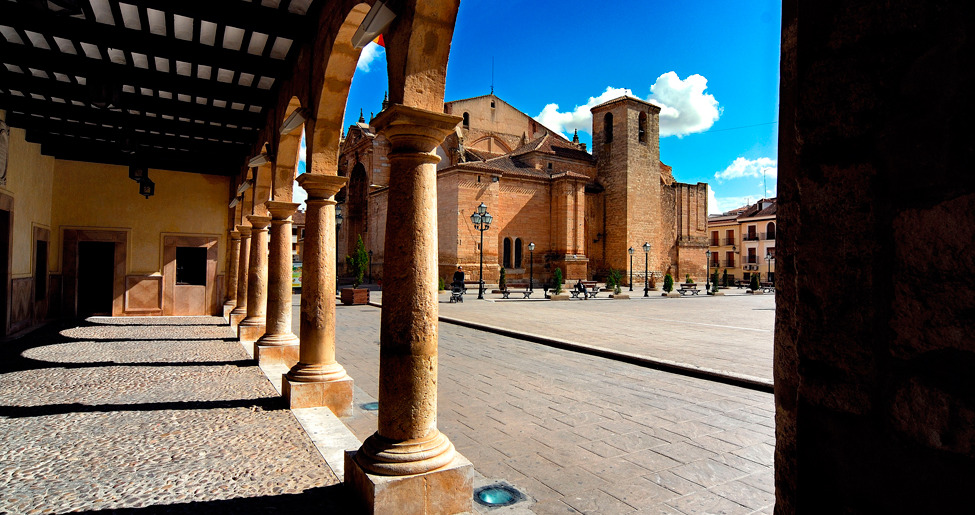 Villarrobledo, 86 km from the capital, is one of the biggest cities of the Albacetense part of la Mancha. Within its municipality are the districts of Moharras and Casa de Peñas. It had its greatest economic and social splendor in the 16th century, as various constructions built during this century demonstrate, such as the current church of Saint Blaise, various convents, and including the house of the City Hall. All of these are interesting visits. But additionally, the town offers an urban area of wide streets and whitewashed walls in the style of other Manchegan towns and characteristic of the wine industry that prevails in this area.

Deserving a special mention are the Carnivals in this town, some of the most important in Spain, declared of National Touristic Interest.

We can make our first stop on our tour through Villarrobledo in its Main Square, where we will find some of the most important buildings, such as the City Hall and the Church of Saint Blaise. Both buildings and the plaza itself are declared Assets of Cultural Interest, granting this small piece of terrain an immeasurable patrimonial value. The church of Saint Blaise deserves a full stop. It was built over the remains of the older church, which had become too small, throughout the 16th century. Its construction had various phases, and so we therefore see different architectural styles, from Gothic to Baroque, passing though the Renaissance. In the main chapel we will find the jewel of the church, a huge Baroque altarpiece in the Churrigueresque style, by Marcos de Evangelio in the 18th century.

As we have mentioned, also during the 16th century, three cloistered convents were founded, San Bernardo, Carmelites, and Order of Saint Clare. The latter was founded in 1614 by Juan Cano Morgan and his wife. Their tombs were in the church of the convent, but now they rest in the cloister. The rooms are highlighted by their sobriety, in the Franciscan style; some rooms have thick, whitewashed walls and reddish tiles; there is a square cloister. Among the more outstanding valuables that are preserved in the convent, a canvas painting called “The workshop of Saint Joseph” by Maella at the end of the 18th century stands out. And to finish with the religious buildings, we cannot forget to mention the hermitage of Charity, which guards the patron of the town. It has been reformed but it presents a unique space with a wood ceiling and square presbytery covered with a cupola on pendentives, separated from the nave by a lovely lattice. Take note of the silver plinth that holds the image of the Virgin and a miniature of the cerro rico de Potosí, as well as the arch that accompanies the image, and the crown of gold - all coming from the Indies.

Moving now to civil architecture, we find various examples of Noble Houses in the village, decorated with coats of arms and constructed between the 16th and 18th centuries. For example, in the Main Square the house of los López Muñoz, whose crest is protected under a classical triangular gable; the house of los Pacheco with a beautiful entry door decorated with a split gable, crest and candelabrum reliefs; and on calle Pedregal the house of los Romero Alarcón, which preserves a lovely coat of arms carved by Martínez de Mendizabel in 1627. And returning again to the starting point of our visit, the Main Square, we can highlight the City Hall building with its simple facade from the Renaissance court and double arcade with six openings and superimposed orders framed between abutments, one with the crest of the city and another with the town clock.

Other 20th century buildings such as the theater, with a facade from the modernist court or the municipal market, begun in 1929 and with an interesting convex corner facade. Additionally, in the region of La Pasadilla you can visit a traditional hydraulic system formed by flour water mill, various cisterns and wells. And don’t forget, as well, their cheeses, jars, and wine.