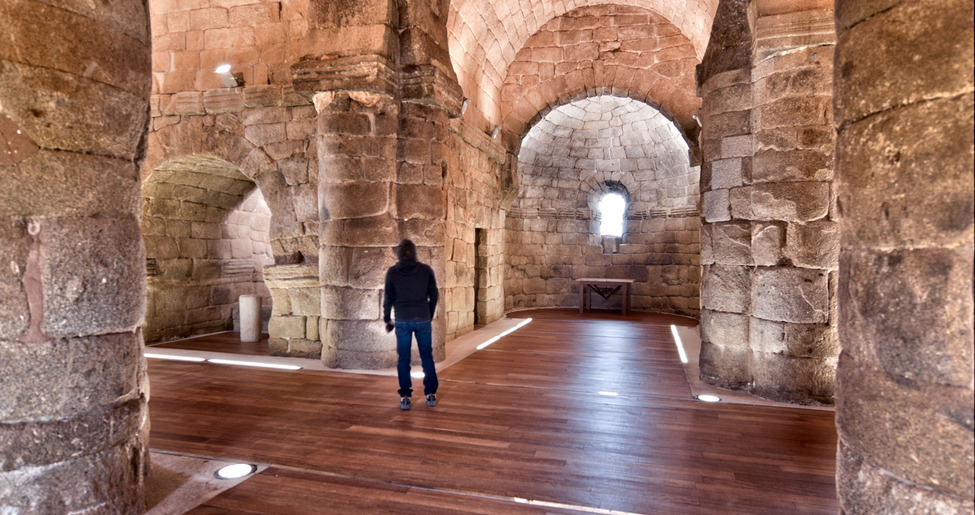 No place in the Peninsula like Santa María de Melque transports us to the Early Middle Ages. Its architecture not only shows us the last examples of the Roman world, but it also has features of eastern buildings from Syria and Jordan. Walking through its grounds, chapels and halls, passing under its horseshoe arches and admiring the remains of the decorations and the sarcophagus of the founder constitute a true journey in time.

The church of Santa María de Melque is built in granite stonework that is unevenly cut, with angled pieces to fix some adjustments. The walls, made from unevenly sized stonework, but at the same time very well laboured, are extremely robust and can be up to 1.4 metres thick.

The floor plan is in a Greek-cross layout with uneven arms; the longest one is the one which goes from east to west, which concludes with the square apse inside. Later, a series of rooms were gradually added, one on each side of the aforementioned apse and another at the feet of the transept, on the left-hand side, which detracts from the exterior Greek-cross floor layout.

On the transept’s dome is the beginning of what was a tower that was later added when it was given the purpose of fortress.

The access to the church opens on the west-side through a decorated gap discharged from an ultra-semi-circular arch, showing another series of gaps in the four façades.

Its openings for lighting, with barely closed horseshoe archways, are quite small, which has been interpreted as being due to the fear of a possible collapse. Others want to see a structure that is not only religious but also defensive in this building, which even has rounded corners.

The only external decoration besides the springer on the window arches is a ribbed granite trim that covers all of the parameters under the eaves.

The interior decoration takes on two forms: a raised trim, like on the outside, and plastering, the remains of which are preserved in the transverse arch to the south and they have classic tree motifs of the view suggesting the Caliph and the Visigoth from the fleur-de-lis and rosettes.

But the visit to this enclave doesn’t end here. Because the church was part of a big monastery, erected at the end of the 7th century, just before the Islamic conquest. It survived said conquest, firstly as a Mozarabic religious community. Later, as a Muslim village which used the temple as a fortress, adding a tower to it, the remains of which are still visible. When King Alfonso VI conquered Toledo, the church recovered its liturgical practice, as well as its military practice, and the remains of walls were witnesses of a settlement that only disappeared when it was confiscated at the end of the 14th century.

It was at the beginning of the 20th century when heritage researchers discovered and understood the value of this gem. The restoration works carried out since then allows us to see a true Visigothic church in the present day, as if we were time travellers.

Free entrance. Closed on Mondays. Open all year except on 24th, 25th and 31st December and 1st and 6th of January.

April-October: from Tuesday to Sunday: 11am to 8pm.

November to March: from Tuesday to Sunday: 9am to 6pm.