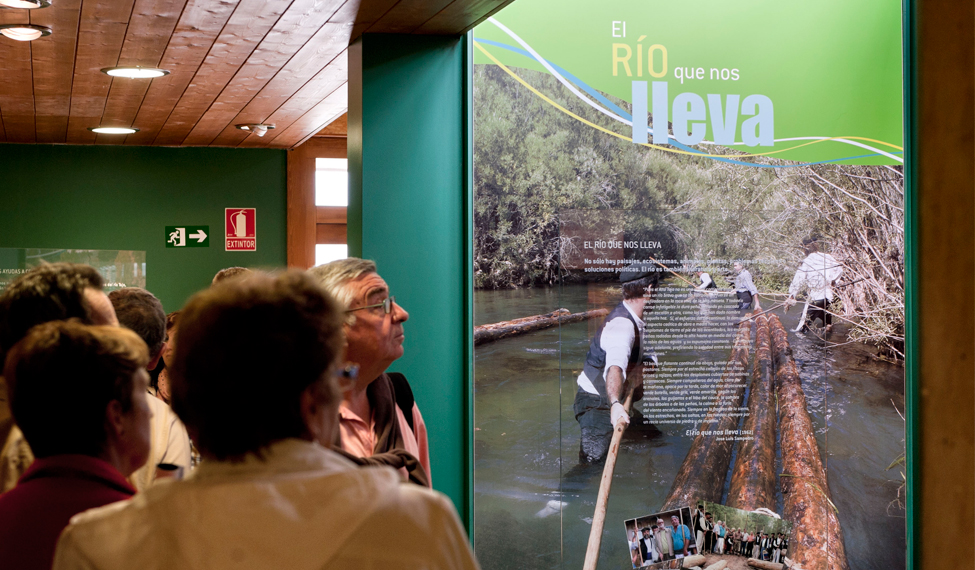 José Luis Sampedro Sáez (Barcelona 1917-Madrid 2013), writer, humanist and economist spent his first 13 years of life in Tangier, a city that in those days was under the condominium of various countries (among them, Spain); his adolescence in places like Cihuela (Soria), Zaragoza and Aranjuez, where he completed his high school studies and found the inspirational seed for two of his future novels: “El Real Sitio” (“The Royal Estate”) and “El río que nos lleva” (“The River that Carries Us”); later, he lived in Madrid, where he passed the public examinations to be a civil worker in Customs, being sent to Santander (1935); there, the Civil War surprised him and he was he was moved by the Republican army, spending the duration of the dispute in Cataluña, Guadalajara, and Huete (Cuenca).

When the war ended, he moved again to Madrid, where he completed his university studies in Economics, graduating with Premio Extraordinario (a special distinction for students graduating with top honors). He began to work at the Foreign Bank while also teaching classes at the University, becoming Professor of Economic Structure at the Complutense and advocating for a “more humane, more supportive” economy, “able to contribute to developing the dignity of the people”. In the sixties, in the face of the dismissals of professors Aranguren and Tierno Galván, he decided to be a visiting professor at Salford and Liverpool Universities. Upon returning to Spain, he reincorporated into the Foreign Bank as an advisor. In 1977 he was appointed as a senator in the Constituent Courts.

In 1990 he was elected as a member of the Royal Spanish Academy, where he delivered a heterodox speech regarding income related to the theme of his novel “La vieja sirena” (“The old Mermaid”), published in the same year, which is considered to be an ode to life, love and tolerance. In 2010 he received the Order of Arts and Letters of Spain for “his outstanding literary trajectory and his ideas regarding the problems of his day” and, one year later, the Spanish National Award for Spanish Literature. In 2012 he was granted an honorary degree, Doctor Honoris Causa, by the University of Alcalá.

All of these changes and residences are reflected in the very notable open, tolerant, multicultural, committed and extremely lucid character of his works and way of thinking.

Side by side with the aforementioned professional activities, he developed an intense literary work. He achieved various successes with novels (he published more than ten) such as “October, October”, “La sonrisa estrusca” (“The Etruscan Smile”) and “La vieja sirena”. He also wrote important pieces regarding the economy; as well as stories, plays, essays…

But, of all his creative body of work, that which stands out the most is “El río que nos lleva” (1961), the novel that would definitively unite the figure of Sampedro with the province of Guadalajara. The action takes place, fundamentally, along the course of the Tagus River through the province, and, since its publication, it has been a valuable source of knowledge and dissemination regarding this natural space. Sampedro constructs a masterful storyline in which we can see a profound psychological study of the characters; he describes landscapes, towns and a way of life on the verge of extinction: that of “los gancheros”, who for five centuries led the felled tree trunks down the river from the alto Tajo and the Guadiela to Aranjuez, Toledo and Talavera de la Reina; in the middle of the 1940s the last trip was made from Peralejos de las Truchas to Aranjuez by way of the fluvial channel. The incident was made into a film in 1989 by Antonio de Real with Tony Peck, Alfredo Landa, Eulalia Ramón and Fernando Fernán-Gómez as the main characters.

Both the capital of Guadalajara and the entire province have honored José Luis Sampedro with a variety of distinctions, naming him an adopted Guadalajareño. The Council gave him the provincial plaque of merit (1988). A high school teaching institute in the capital bears his name.

In 2017, the centenary of his birth, a diverse program of cultural and touristic activities has been designed. Lectures and discussions, seminars in the Torija castle, film workshops, the traveling exhibition “The geography of José Luis Sampero” and, to culminate it all, the XXI Ganchera Festival, which will be celebrated on the 26th of August in Taravilla, paying homage to the writer and at which his widow, Olga Lucas, will be present.