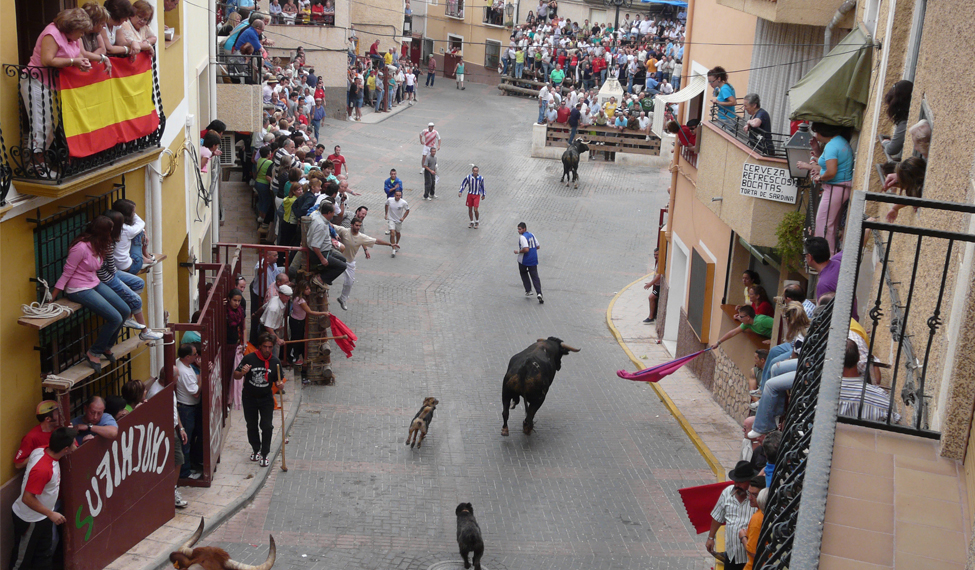 When we speak of the bull runs in Elche de la Sierra, we speak of customs, history, collective memory, idiosyncrasy, and, without a doubt, the most important event of the September festivals and the feast of San Blas. The bull runs are the component that most unites the people: the current inhabitants of the town, but also those who return to their homeland for the occasion, neighbors who come from the region and from other points throughout all of Spain.

Elche de la Sierra is known as “The birthplace of bull runs”, seeing as that, according to historical data, they are the oldest of the region.

As an anecdote, and possibly the first contact with bulls in our area, José María Cossío, in his book Cossío - Classical and Hispanic Mythology. The bull in Iberian religions, tells us:

The bull by this time in ages less unknown lent itself, due to its rugged condition, to be used in war. Polibius tells us that in the Carthaginian campaigns of Hannibal, in the passage of Falermo, the Iberian merchants that accompanied him employed two thousand or more bulls with flaming vine shoots on their horns to break through the enemy lines, pushing them towards the narrow gorges through which their troops needed to pass and in this way opening up the path. Such a strategy, says Diodorus, was employed in our peninsula against Hamilcar Barca in the disaster of Helike (for many historians, Elche de la Sierra), which cost the life of the Carthaginian leader (…)  The veracity of this resource has been doubted, but knowing that later the Iberians who accompanied Hannibal had used the bull, there is no reason to deny it. Such even corresponds to the year 229-228 B.C.

The bull runs in Elche de la Sierra are celebrated on two dates:

The current route for the bull run is from theCorral Coloraoto the town and, once there, from the Puente (bridge) del Arroyo, Estrecho de los Huertos, Plaza Vieja, Puerta de la Iglesia and to the Plaza del Ayuntamiento (city hall).

The schedule in order to participate is as follows: