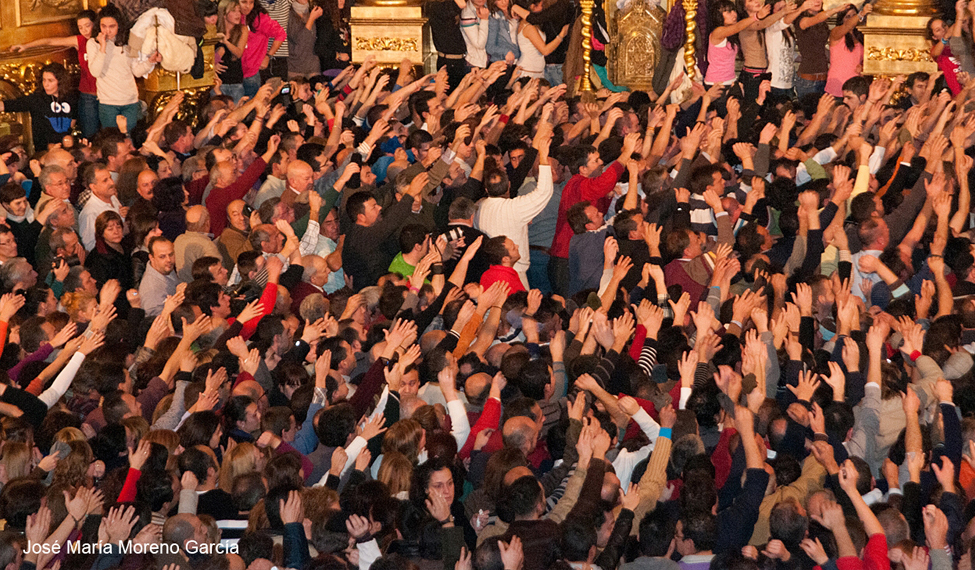 On the evening of the seventh of December, the benches of the church of Horcajo de Santiago having been cleared, the crowd waits in silence for the figure of the Immaculate Conception to exit. When she appears, they raise their hands towards her and thousands of voices cry “Vítor! Vítor! Vítor!” in an impressive response to the chant “Praise be to the Immaculate Conception of the Holy Virgin Mary, conceived without sin!” Two groups dramatize a dispute between which of them wants to carry the figure out of the church, and which group opposes. When they finish, three horsemen wait at the door, the horses’ heads covered in the blue and white colors of the Immaculate Mary: one bears the figure, the other two the tassels. Throughout the night they process through Horcajo, without stopping, neither the horsemen nor the chant of the crowd that accompanies them, nor the shouts of “Vítor!” After sixteen hours of processioning, a new feigned battle is struck up, at midday on the eighth of December, between those who want the figure to remain out in the town, and those who want to replace her in the temple.

The deliciouspipirranais a typical dish of Horcajo, specially prepared for this festival. Made with a base ofbacalaocod, mushrooms, ham, and pig’s ear, it is a must to try!