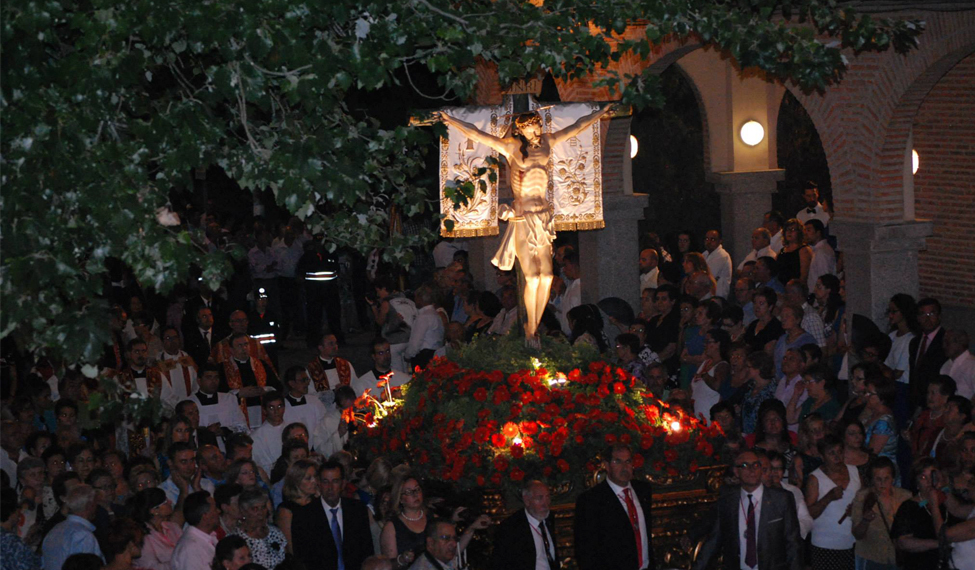 Back in the days of Philip II, there was a cavalry outside La Puebla de Almoradiel and there was a cross where believers said their prayers. In 1764, this cavalry was converted into a hermitage and in 1766 the image of the Santísimo Cristo de la Salud (Holy Christ of Health) was commissioned to Juan Antonio Argüelles. Since then, the image has been preserved and it remains in the same place for which it was aimed. In 2016 the 250thanniversary of the Christ’s image was commemorated.

Days before the grape harvest, from August 31stto September 3th, this festivity is held, the most important for the municipality because of the strong devotion it arises both from the locals and from the citizens from the nearby villages who, during those days, make a pilgrimage on foot to the Crucified hermitage.

On August 31stin the afternoon, the Fair and Festivities are officially inaugurated with raising of the flag and bang at Constitución square. Afterwards, processional move of the Stmo. Cristo image from his hermitage to the Parish Church, where solemn evensongs are sung. Later on, spectacular firework show. On September 1st, the main day during the festivities, hot chocolate for everyone at Iglesia square in consideration of the pilgrims who are not from the village, and at 11 in the morning solemn Eucharist celebration, to end, at noon with the traditional “La Flor de La Mancha” concert. By mid-afternoon, great procession of the Stmo. Cristo de la Salud from the Parish Church to his hermitage, where thousands of faithful meet in the thick of a really breathtaking fervor. By night the day ends with variety performances and barn dance. On September 2ndand 3rd, different religious acts, concerts, passacaglia, sports events and barn dances are held.