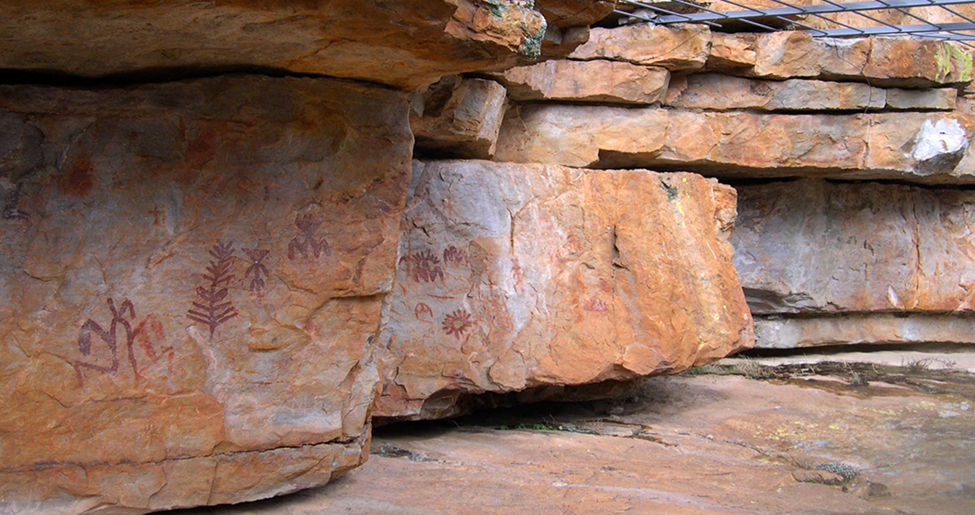 Peña Escrita and Chorrera de los Batanes or Batanera were discovered in Fuencaliente in 1783 by a parish priest from Montoro, López de Cárdenas, whilst he was collecting minerals and other antiques for the Count of Floridablanca who, at the request of King Carlos III, was organising the cabinet for Natural History in Madrid. These first copies of schematic rock paintings known in the Peninsula and probably across the world are owed to him.

It is one of the biggest and best preserved collections of schematic rock paintings. They are found in a shelter of quartz rocks located 920 metres high, in a broken wall, which has 104 motifs across 8 panels, going from left to right. The paintings are made from clay rich in iron oxide and organic protein components which are used as mortar.

The most depicted theme is that of very slim human figures that generally appear as couples of men and women. They are sometimes represented with a head, feather headwear and horns, and others are headless depicted in ritual dances or hunting scenes and on the inside using plain colours, mainly ochres and reds, whereas black and white are barely used. Next to them there are animal motifs, representations of the sun and others that look like vegetal motifs. Likewise there are other signs of geometrical tracing.