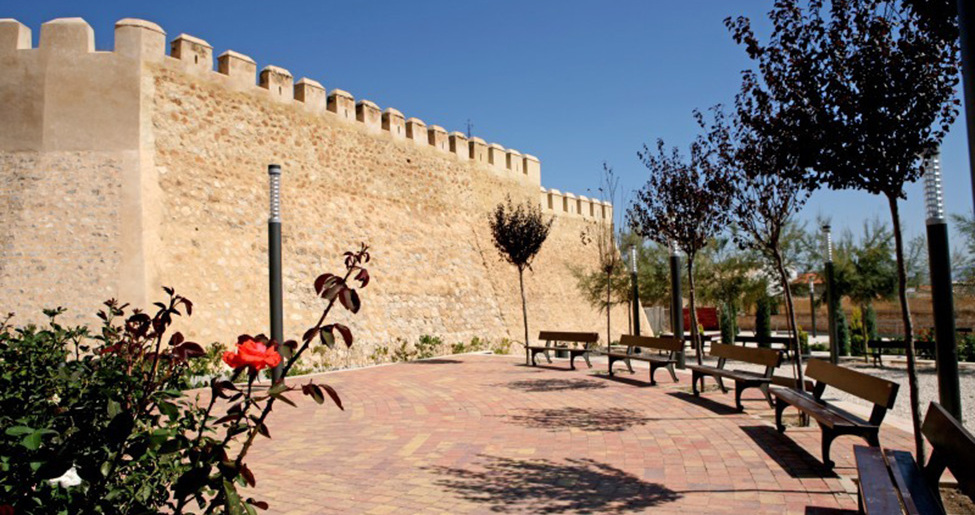 The fortress of Caudete had its origins as a Muslim construction, smaller than its current size, appearing at the end of the 11th century or the beginning of the 12th with the intention to stop the advancement of the Christian kingdom. It was built on a small elevated area, defended naturally by a watercourse.  The walls that from the interior preserve the fortification correspond to the Almohad period of Muslim rule and were made with thetapial(mud) technique.

This castle is an interesting example of how some of these medieval fortresses adapted to the new artillery based on gunpowder. The walls have a reinforcement calledalambor, which forms a slope and protected them from the cannons in the 15th century.

The reinforcement of its walls dates back to the 15th century, with hooks, also called in Spanishalambor, which form a slope.Their main objective was to protect the cannons in the 15th century. This castle is a really interesting sample of this technique, and how some medieval fortresses got used to the new artillery guns based on powder.

Towards the 16th century the fortress lost its military function, which provoked its gradual abandonment. Between 1740 and 1834 the building was used as a cemetery by the Parochial Church of Saint Catherine.

The restoration work to the building that has recently been realized has resulted in the recovery of its southern and northeastern walls, the replacement of the battlements and the identification of the perimeter of its defensive towers. A modern garden surrounds part of the castle and connects it, by the alley of Santa Catalina, with the Plaza of the Church.

Situated in the old town of Caudete, you can access it by foot as well as by car. Access to the exterior is free, but the interior is still in process of restoration. Through the tourism office there are guided visits offered which include the visit to the exterior of the castle and its history. For more information you can call 965828134.

The unique location of Caudete has influenced the history and culture of this town. It had special strategic importance in the disputes between Aragón and Castile for the border territories. It came to belong to the Kingdom of Valencia, and ended up becoming a royal village, earning in this way special privileges. Caudete possesses, consequently, the titles of Royal, very Noble, very Loyal, and exceptionally Faithful Village.