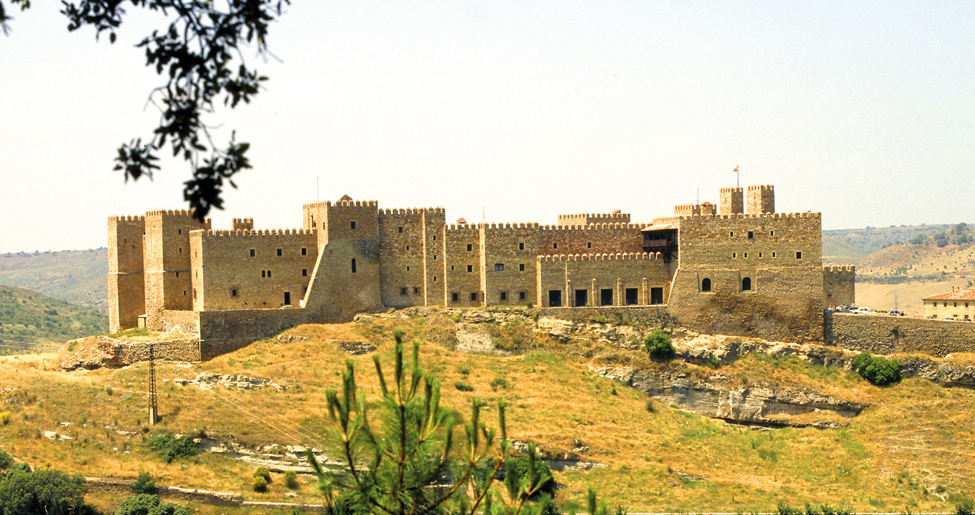 Magnificent for the restoration that has outfitted it as a NationalParadorof Tourism, it preserves the early medieval spirit, and allows us to take an in-depth look at a great fortress, built in the 12th century, that was used continuously as a bishop’s residence until the middle of the 19th century.

A bulwark gives access to the main gate, from the 14th century, flanked by two turrets with their machicolations and battlements in the upper part. The large interior patio is reminiscent of the  Arab alcazabas (citadels), and similarly to them, it housed the population of Sigüeza in case of attack. In the center the well that provided water to the fortress remains. The visitable areas of the interior perfectly recreate the halls and rooms of carved stone in which the bishops and their court lived: furniture of the era, armor, elaborate chimneys…

The warrior bishop Don Bernardo de Agén, who conquered Sigüenza in 1123, was the first to begin the reforms of the old castle, possibly an Arab fortress prior, but much more modest.

In the spring of 1297 it was taken, briefly, by the supporters of Alfonso de la Cerda, aspirant to the throne of Castile, although the local people of the city retook it by lighting a fire at the gates with a tub of lard.

Pedro I of Castile incarcerated his wife Doña Blanca in the castle in 1355, to prevent her from serving to aid the nobles who wanted to overthrow him

In the 15th century it served as a refuge against the attacks carried out by the Navarrese, during the war of the Princes of Aragón. Bishop Don Fernando Luján ordered, therefore, that all the inhabitants of Sigüenza go armed to the walls when the bells tolled, under penalty of having their assets confiscated.

In 1465 Diego López de Madrid named himself bishop when his predecessor died, garrisoning himself in the castle. Even though the Pope didn’t recognize his position, he held out there for three years, at the end of which the fortress was taken not by force, but by the betrayal of a servant of the self-proclaimed bishop. Don Pedro González de Mendoza, who would later become cardinal, replaced him. Mendoza was responsible for the bulwark or barbican that we can still see protecting the main gate, and for transforming the fortress into a palace, with rooms similar to those that we now see in the Parador.

During the War of Succession, in 1710, the Austrian candidate to the Spanish throne, Archduke Carlos de Austria, inhabited it. Supporters of Austria and Bourbon alternated possessing the castle, without it suffering damages.

At the end of the 18th century, bishop Don Juan Díaz de la Guerra augmented the residential character of the castle, making living spaces and offices for civil servants.

During the Napoleonic occupation, the castle abandoned its character as a bishop’s residence to be quarters for the French troops beginning in 1808. The incessant campaign of Juan Martín the Undaunted obligated them to abandon it momentarily, returning to occupy it in 1811.

In 1827 it would return to be a bishop’s residence, and it housed king Ferdinand VII and his entourage when they returned from the Solán de Cabras hot springs spa. There, just as in the city, they were looking for a solution to queen María Josefa Amalia’s infertility. In Sigüenza, they asked for the protection of Santa Librada (Wilgefortis).

It still served as a fortress, for the last time, during the Carlist Wars, suffering major damages and bing abandoned as a residence by the bishops. A ruin that was completed in the Civil War of 1936, and whose restoration was begun in 1970, directed by the architect J.L. Picardo, based on ancient plans, checked against the remains that were still standing.

Free access to theParadorof Tourism, which allows you to visit the exterior, and the interior, although the area that is for the rooms of guests lodging there is restricted.

Doña Blanca of Bourbon remained confined in this castle for four years. When she arrived, already married to Pedro I of Castile, the was only sixteen years old. She died six years later, at just twenty two.