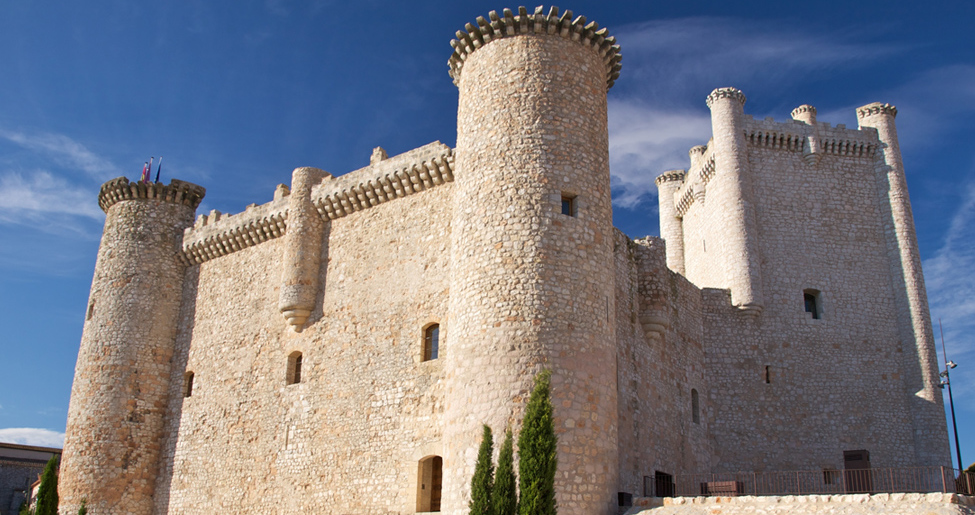 One of a kind architecture, it presents a beauty infrequent in these military fortresses. The magnificent state of conservation of the castle allows us to get an in-depth look at a medieval fortress prior to the use of artillery and take a tour through its interior.

Its high exterior walls were designed to make scaling them difficult for assailants, and its own walls are not very thick, which indicates that it was constructed before the use of artillery was popular. Its great main tower is unique, almost independent of the rest of the fortress, which would have served as a last resistance stronghold.

Its first owner, and possibly builder, in the 14th century, was Alonso Fernández Coronel. Cardinal Pedro González de Mendoza would be its next owner. Juan de Puelles, Navarrese captain, captured the fortress in 1445 and from it executed continuous sacks, until arriving at Sigüenza. The troops of the archbishop of Toledo, Carrillo, and those of Iñigo López de Mendoza, would not take it until 1451. In the 19th century it was occupied by the French troops of general Hugo - father of the novelist Victor Hugo - and later by Juan Martín the Undaunted, who blew it up, leaving it in ruins. The current restoration was undertaken in 1962.

In the parade grounds of the castle you will find the CITUG (Centro de Interpretación Turistica de la Provincia de Guadalajara - Center of Touristic Interpretation of the Guadalajara Province). It occupies a modern and functional four-story building which has museum-like elements precisely for the optimal understanding and promotion of  all the touristic resources of the province. Since the beginning of 2016, the Center has had a new space dedicated to the figure of El Cid and another dedicated to the Geoparque de la Comarca de Molina-Alto Tajo (Geo-park of the region of Molina-Alto Tajo).

In the upper levels of the Tower Keep of the castle we find the museum of the book “Trip to Alcarria” by Camilo José Cela (Nobel prize in Literature 1989). Opened in 1995, it is probably the only museum in the world dedicated exclusively to a book.

The castle can be visited combined with the Center of Touristic Interpretation of the Guadalajara Province.

Its first owner, Alonso Fernández Coronel, took the side of Enrique de Trastámara, aspirant to the throne of Castile, but captured by king Pedro, he was beheaded in his presence. He is the author of the famous phrase: “Castile makes men, and wastes them.”