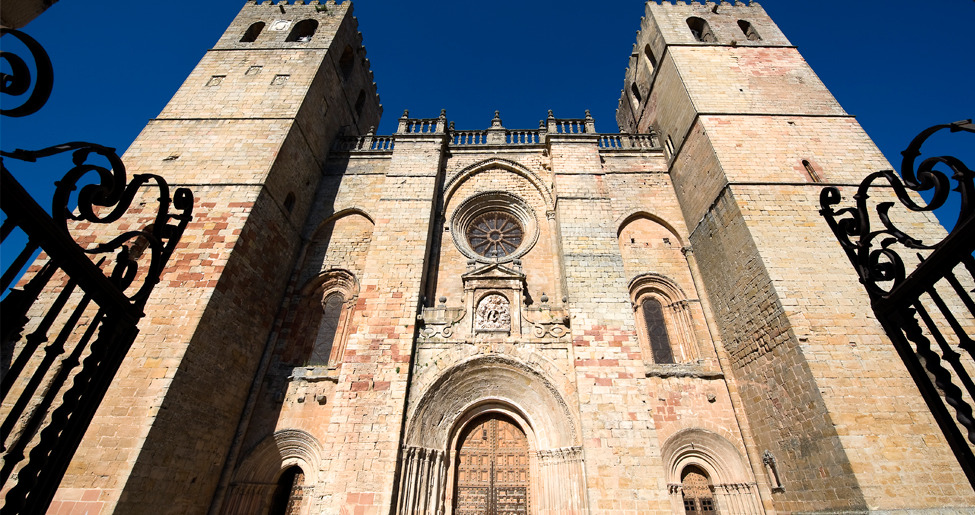 It is, all together, a beautiful example of the Cistercian or Early Gothic: we can be assured that it is one of the most notable Cistercian cathedrals. Its fundamental style is from the time of transition to the Romano-Gothic with Aquitaine-Burgundian influence.

The Romanesque style appears on the doors of the main facade, the pillars of the transept, some of those of the central nave, and all of the lower walls of the church. We can see the Gothic style in the upper walls, the transept and its rose windows, the large windows of the presbytery and central nave and the new cloister. The cathedral is surrounded by walls and towers, forming a fortified ensemble with a military appearance, which it would loose for the most part in the early years of the 16th century.

The cathedral of Sigüenza is known throughout Spain as “El Doncel (the young nobleman) de Sigüenza”. This person was a member of the Vázquez de Arce family and a knight of St. James who died at twenty-five years old in the War of Granada.

Above the main door a large rose window opens up, a piece from the 13th century, with a complicated tracery.

The floor plan of the church is that of a Latin cross, with three naves, transept and main chapel with an ambulatory. It is illuminated by small open spaces above the arcades, by the large rose windows and by the lantern that is at the top of the transept vault.

The naves are divided by large pillars with attached columns, which are topped with lines of united capitals, above which the ogival arches are supported and from where the nerves of the ribbed vaulting begin.

In the cathedral special attention should be paid to: the Chapels of the Arce family, that of Saint Peter, that of the Annunciation, and that of Saint Mark, the statue of the Doncel, and the gothic rose windows from the 12th-16th centuries.