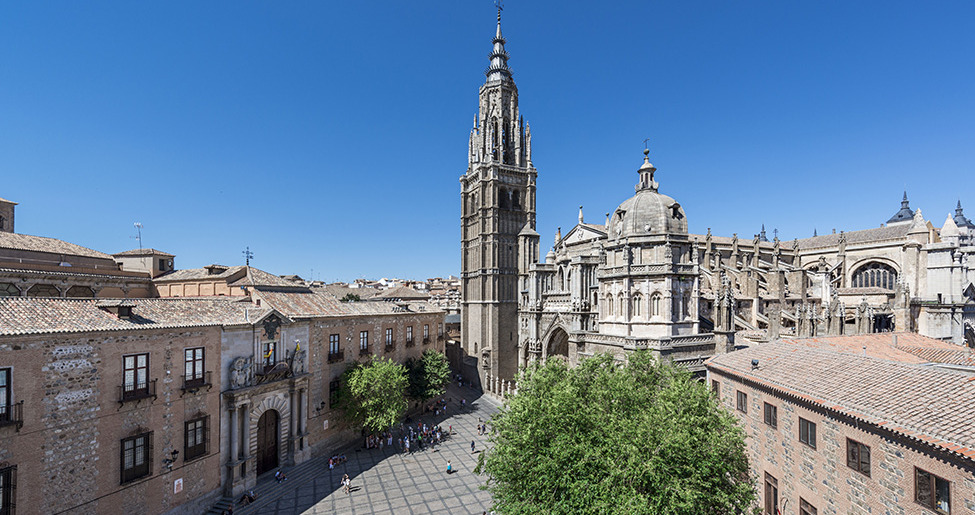 The Holy Cathedral Church began to be built in 1227 on the foundations of the Visigothic Cathedral from the 6th century and which, in turn, was used as a mosque.
The building is Gothic with a clear French influence. The floor of the temple has the shape of a Christian cross and it is inscribed in a rectangle. The elevation marks the cross, creating a vertical triangular form, since the central nave and the transept have much greater width and height than the lateral naves, being the outer naves the lower ones. It measures 120 m long by 60 m wide. It is composed of 5 naves, supported by 88 columns and 72 vaults. The side naves extend behind the Great Chapel surrounding the high altar and creating an ambulatory with a double semicircular aisle. Its first architect is the master Martín, from France, who is the responsible for the traces of the plant and the beginnings of the work in the head of the temple. Until the 14th century, the side naves could not be closed and it is in this same century when the lower cloister with its outbuildings (the most notable is the San Blas Chapel) is built on the north side.

In the 15th century, San Pedro Chapel is built next to the entrance of the cloister and at the end of this century, in 1493, the last vault is closed and this magnificent construction is concluded.

In the 16th century, the altarpiece, high part of the choir, and bars are built. In the first half of the century, all the stained glass windows are closed and various plant modifications are made, such as the Chapter Hall, the Mozarabic Chapel and the Chapel of the New Kings.

To admire the grandeur of the cathedral, the best thing is to climb one of the towers in Toledo (the Library of Castilla-La Mancha, in the Alcázar, or the Church of the Jesuits). From there, we will see the roofs of the cathedral forming a perfect cross, surrounded by flying buttress and slender pinnacles.

The oldest gate of the temple is the north transept, inspired by the gate of the Parisian Notre Dame Cathedral, given the great importance that French Gothic gave to these entrances. The mullion with the Virgin and Child introduces the theme of the scenes of the life of Christ, carved on his tympanum. It is a kind of catechism in stone for the faithful from the 13th century. We must read it starting at the lower left, from the Annunciation to the Last Judgment and the Transit of the Virgin on the top. Its current stone dome is from the beginning of the 17th century, covering the chapel of Corpus Christi, destined by mandate of the cardinal Cisneros, to the recovery of the Mozarabic rite, replaced by the catholic one, coinciding with the Christian conquest of Toledo, in 1085.

The tower is visitable and we can climb up to enjoy an amazing panoramic view. With its ninety meters of height, it was finished with the last octagonal body, finished with the three crowns by the master Hanequin de Bruselas in the 15th century.

The main facade has three access gates, the “Perdón” gate (Forgiveness gate) or the “Reyes” gate (Kings gate) in the center, the “Palmas” gate (Palms gate) or the “Infierno” gate (Hell gate) next to the tower and the “Escribanos” gate (Scribes gate) or the “Juicio” gate (Judgment gate) bordering the Mozarabic Chapel. Another two are the aforementioned door of the north transept called the “Feria” (Fair), the “Chapinería”, the “Niño Perdido” (Lost Child) or the “Reloj” (Clock), which was placed by Cardinal Lorenzana at the end of the 18th century to mark the canonical hours, that is why it only has a hand. And finally, the “Puerta de los Leones” (the Lions gate), of the south transept, combining Gothic and Baroque sculptures, all of them of excellent quality.

So far the Orthodox Gothic layout is fulfilled. However, the Toledo cathedral has more entrances, two communicate with the cloister, Presentation and Santa Catalina, and the last, unusual for its location on the south wall, the neoclassical “Puerta Llana”, the only one that has no steps. This modest "service" gate, which for centuries let in all the stonework and sculptures for the temple, became the noble porch for the passage of the famous Custodia (Custody), when it comes majestically in a procession of Corpus Christi. Today it is also the gateway for visitors. We can enter the cloister by the “Puerta de Mollete” and there are five additional gates on the walls of the structures added to the temple.

Inside the Cathedral of Toledo there are areas that, along with their respective works of art, require a visit and a leisurely look. They are the so-called Museos Catedralicios (Cathedral Museums): the Sacristía, the Tesoro, the Capitular Room, the Coro and the Transparente.

CHAPELS AND THE CAPITULAR ROOM

In the interior, the greater chapel is one of the places of the Cathedral that holds more works of art. Closed originally by bars carved in stone, of which still a part is conserved, it treasures a great number of statues. In the two pillars that give access to the chapel we see, on the left, the legendary pastor Martín Alhaja, who gave very relevant information to win the battle of the Navas de Tolosa. On the right, the “Alfaquí”, portrait of Abu Walid, a Muslim who carried a message of tolerance to Alfonso VI, betting on the coexistence of Arabs and Christians.

The Mozarabic chapel is especially interesting due to the fact of having been designated by Cardinal Cisneros to restore the Mozarabic rite in Toledo. This form of celebrating the mass had been conserved among the Christians who lived in Muslim territory, from the Visigothic domination. The dome of the chapel is the work by the son of El Greco, Jorge Manuel Theotocopuli, the altar of bronze and marble of several colours, by Juan Manzano, and the Gothic bars by Juan Francés, 1524.

The chapel of the New Kings, today without worship, forms a small church, whose hall was made by the architect Alonso de Covarrubias. It owes its name to the new dynasty Trastámara that reigned in Castile, it holds numerous tombs of its kings, with interesting carvings.

Among the chapels of the ambulatory, it stands out the access to the Capitular Room, with rich Plateresque ornamentation, and the portraits of all the Toledo archbishops. Over them, one of the great sets of Spanish fresco painting, by Juan de Borgoña.

The collection preserved in the Sacristy, with “El Expolio” and “El Apostolado” by El Greco, paintings by Caravaggio, Titian, Van Dyck, Goya, Morales, Rubens, Bassano and many others, is excellent. Juan de Borgoña and Lucas Giordano should be mentioned separately, since their most outstanding paintings are the fresco ones that cover the walls of the Capitular Room, in the case of the first, and the ceiling of the Sacristy, the second.

The Primada Cathedral of Toledo has the largest number of preserved medieval stained glass windows, such as the ones in the rose window of the transept, those of the main chapel and those of great figures of saints and apostles on the east side.

The so-called “Transparente” is the great masterpiece of the sculptor Narciso Tomé, completed in 1732, and made in Genoese, Jasper and Bronze marbles. Conceived as an altarpiece, and illuminated by the skylights of the apse, it presents numerous figures and compositions representing passages of the Bible.

Another very present type of art is goldsmithing. The “Tesoro” keeps reliquaries, staves, clothes and liturgical objects in many displays, some of which are of great historical value. But without a doubt, the most spectacular one is exposed in the cathedral treasure: the imposing “Custodia” de Enrique de Arfe, composed of countless pieces as a lace of Gothic silver filigrees bathed in gold; the precious case for the true ostensory of the Sacred Form, a "small custody" of pure gold, made with the first gold that Christopher Columbus brought from America and which belonged to the Catholic Monarchs. Once a year, the “Custodia” de Arfe goes out to the streets of the city for the exaltation of the faith during the secular procession of Corpus Christi.

The rich sculptural repertoire in every corner has doctrinal and didactic functions, as well as artistic ones. The chorus to the exterior shows numerous scenes of the Old Testament, and the Greater Chapel of the New.

Sunday: free access for those born in Toledo (presenting ID) or belonging to the Diocese; rest of Spanish special price of €2.
More information at http://www.catedralprimada.es/venta_de_entradas/