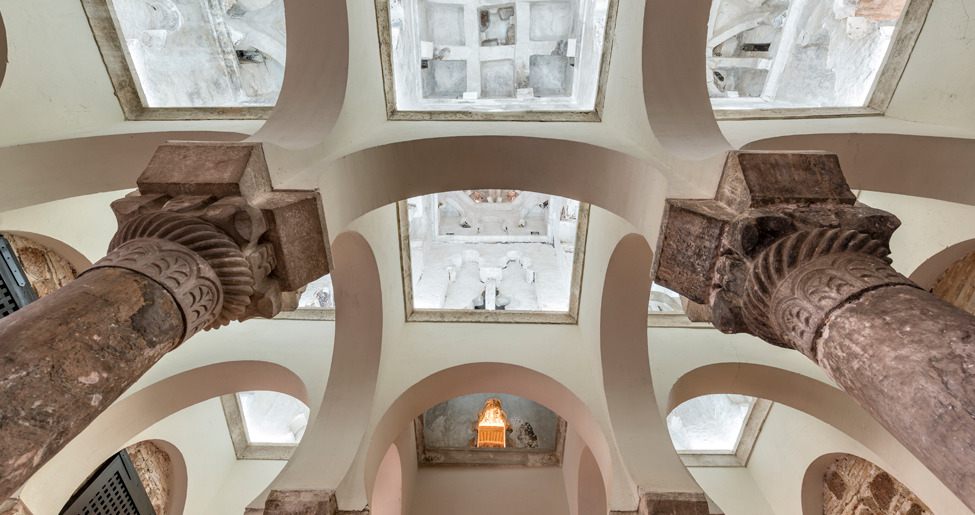 Located next to one of the gates of the walled enclosure and entirely preserved, it is one of the most important monuments of the Hispanic-Muslim and Mudejar architecture in Spain, and the most important exhibition of Islamic art in Toledo. Small like jewels, this valuable ancient building is an unique example of the survival of the Al-Andalus art: a mosque or small oratory from the Caliphal period to which, two centuries later, due to its transformation into a church, an apse was added, following the style of the original building and giving rise to the Mudejar art, in perfect combination and symbiosis.

Its interior is divided in nine spaces, which are covered with rib vaults. They reflect the moment of Caliphal splendor in which it was constructed: year 999. Its Visigothic capitals supporting horseshoe arches and the Romanesque-Mudejar head from the 12th century are a perfect example of how the different cultures have been mutually influenced in the city.

The restoration of the building history, full of difficulties and abandonment, is arduous and lasts until the 20th century. The murals and the founding inscription in brick discovery in 1871 and 1899 boosts critical euphoria and wise and curious visits. Since then, the beauty of its shapes, the exquisite refinement of its trace in arches and vaults, and the discovery in its simple forms of a multiple and complicated combination of lines has fascinated those who have wanted to approach this hidden corner of the artistic heritage of Toledo.

The consortium of Toledo carries out the restoration in January 2006. An stunning Roman paving of the street that crossed just below the mosque was discovered during the searching of the Roman sewer that was outside the walls, under the Bib al-Mardum gate, towards which it was intended to divert and channel the problems of humidity that affected the foundations of the mosque. Thanks to it, nowadays we can contemplate almost 50 meters of Roman remains from the high-imperial stage (1st century a.C.).

In the mosque building, outside, its facades have been restored as well as the founding inscription, and, inside, a better display of the plaster facings (the original ones from the 10th century), in the Islamic zone of the mosque has been achieved.

Regarding the mosque subsoil, it's been possible to reach the natural land and recuperate the lowest original levels of the paving and ventilated vaults have been left in order to protect the building from dangerous humidity.

Underneath the Christian apse (12th century), some structures carved into the rock, presumably from the Early Christianity roman era (3th century a.C), have been left in view.

Finally, the construction of a small glass building has solved the fitting of all remains and structures that are left in view and the retaining of the garden lands; it also works as a small center of interpretation in its entirety.