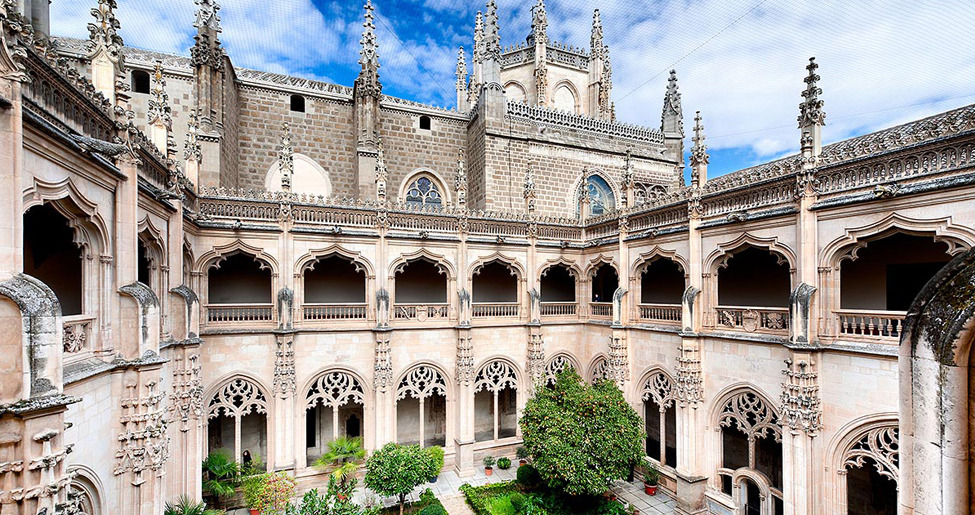 Building commissioned by the Catholic Monarchs to Juan Guas in 1476, who built one of the most beautiful temples in the city of Toledo and one of the best sets of the Hispanic-Flemish Gothic.

The church has a single nave covered with rib vaults, with a star-shape dome over the presbytery, high choir and lateral chapels between the buttresses, highlighting the abundant decoration that embellish the transept and the main chapel. In the latter, the decorative scheme is based on ogee arches and coats of arms of the Catholic Monarchs held by eagles of San Juan.

Through a small door, you can access the cloister, a masterpiece by Enrique Egas, made up of four wings open to a courtyard through large windows of flamboyant tracery, bordered by a frieze of animal and vegetal decoration. On the top floor, the beautiful polychrome ceiling that repeats, such as ornamental motif, emblems, arms and initials of Isabel and Fernando in mudejar style is remarkable.

In its main facade the traditional Isabelline decoration appears, consisting of statues, blind arches, pinnacles, and balls. The chains of captive Christians, who were freed by Fernando II the Catholic in the taking of Malaga and Baeza, stand out.

A fire during the French invasion in 1808 destroyed the original altarpiece, the important library and the building of the community that contained a second cloister with plateresque decoration. After the sale of church lands in the 19th century, that deprived the church from its goods, the friars were expelled, the church was turned into the San Martin de Tours parish, whose primitive temple was demolished for being in ruins, and the cloister was transferred to theComisión de Monumentosto install a museum. In 1954 the Franciscan community returns and in 1977 the parochial life in San Juan de los Reyes is recovered.