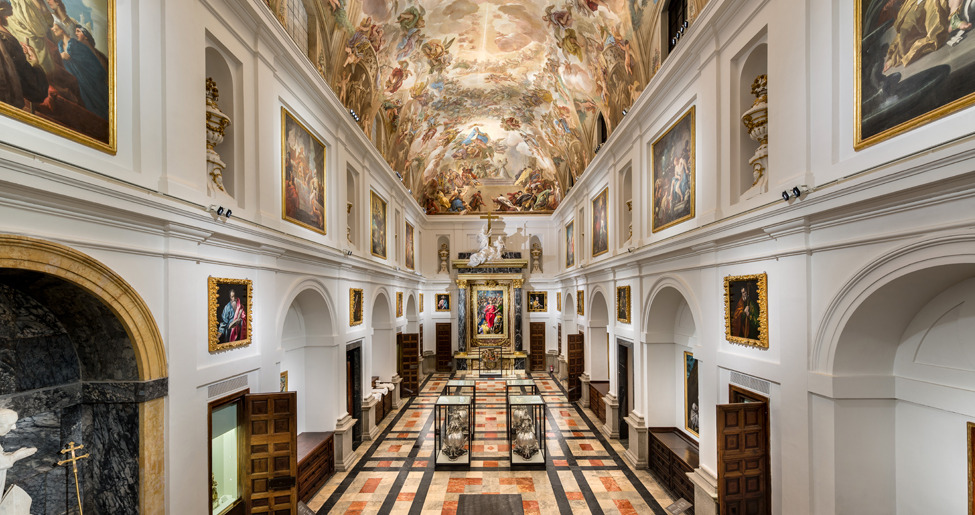 Within the Cathedral of Toledo there are areas that, in addition to the art works they gather, require a visit and an unhurried look. The Cathedral Museums are: the Sacristy, the Treasure, the Chapter Hall, the Choir and the Blind.

At the end of 16thcentury the Sacristy is built by Vergara el Mozo. In its vault, a great fresco of Lucas Jordán, which represents the descent of the Virgin to San Ildefonso’s chasuble, where we can contemplate the self-portrait of the author on the last window of the left. At the back, we can emphasize “el Expolio” of El Greco that he painted in that same place in 1587 at the request of “el Cabildo”, is framed in a marble and bronze altarpiece made in 1798, which replaced other made by El Greco himself and preserves only a sculptural group with the imposition of the chasuble. The whole room is a real art gallery with paintings of the most important painters, such as: El Greco, Caravaggio, Tiziano, Van Dick, Orrente, Tristán, Goya, Morales and José Ramos. In one of its sides, we can find the sepulcher of Roman alabaster of Cardinal Luis de Borbón, a work of Salvatierra in 1824. Next to the Sacristy is the archiepiscopal sacristy with works of painters such as Rivera, Bassano or Bellini among them, and later two rooms complete these others with liturgical clothes made in Toledo between 15thand 17thcenturies.

In 1900 the room of the Treasure was prepared under the tower. Here are the main works of gold work of the Cathedral. Over them, the paintings of the cardboards for the tapestries that later would be made in “la Fábrica de Santa Bárbara” in 1750. But what is more emphasized in the Treasure is the great “Custodia Procesional”, at the request of the Cardinal Cisneros to Enrique de Arfe in 1515, which gathers the Ostensorio or little custodia of its center. This was acquired by the Cardinal Cisneros from the legacy of the Queen Isabel the Catholic and it is believed that it was made with the first gold that arrived from America. Enrique de Arfe makes this custodia following the origin of the towers of Gothic cathedrals and the central custodia of the main altarpiece. It has 2,5 meters high, divided in three bodies. It is compound by 5,600 pieces linked by 12,500 screws. It has also 250 figures of varnish and gold silver. It is crowned by a diamond cross made in 1600 and base from 18thcentury of silver donated by the Cardinal-Infante Luis Antonio de Borbón.

Among many other art works of this Treasure, mainly gold work, we can contemplate the Bible of San Luis, made in France, which was given to Alfonso X in 1258.

At the initiative of Cardinal Cisneros this new chapter hall is created with two rooms, an entrance hall and a hall per se replacing the one which was in the  Mozarabic Chapel.

The entrance hall was built by Enrique Degas and Pedro Gumiel between 1504 and 1512, with a façade sculpt by “Copin de Holanda.” Its inside is “Cisneros” style, combining the Flamboyant Gothic and last mudejar. Rectangular shape where the sides are covered by cupboards, used to archive chapter records. Those from the left wall, made between 1549 and 1551 by Gregorio Pardo at the request of cardinal Siliceo, those from the front are a copy from 1780 made by Gregorio López. The mural paintings in the friso have a plant decoration made by Luis Medina, Diego López and Alonso Sánchez according to Juan de Borgoña’s traces in 1511. The façade of entry to the chapter hall from 1510 is made in morisc and mudejar plastering.

Getting into the Chapter Hall, we can emphasize the coffered ceiling and the “policromado”, made by the famous trace designer and treatise writer Diego López de Arenas and executed by Francisco de Lara. This room is surrounded by oil paintings over the plaster wall, which represents thirteen scenes of “”la Vida de la Virgen” and “la Pasión de Cristo”, separated by false columns, painted by Juan de Borgoña in 1508. Under these, the series of 32 portraits of the first bishops from Toledo, painted by Juan de Borgoña. After Cardinal Tavera, it was executed by famous painters, such as: Commontes, Carvajal, Tristán, Rizi, Goya or Vicente López, among them. The archiepiscopal chair is a Copin de Holanda’s work, made in 1509.

In front of the main altar we can find the most beautiful choir of the European cathedrals, made to gather the cathedral clergy. Archbishops, canons, prebedaries and priests of the Choir. It is compound by a high set of chairs, made from the seat of honor. Its right side was made by Alonso d Berruguete and the left by Felipe Bigarny. The low set of chairs was made by Rodrigo Alemán between 1489 and 1495, where the episodes of the conquest of Granada are represented. In both sides, two big stands from 1570 mad by “Nicolás de Vergara el Viejo” and his son “el Mozo.” In its center, the eagle stand, a German work from 1425. The stand is leaded by a beautiful Gothic French sculpture from 14thcentury full of sweetness and beauty of the “Mother”, called “la Virgen Blanca.” The Choir is closed by a grill made by Domingo de Céspedes between 1541 and 1548.

Considered in those times a summit work of the Spanish Baroque, is integrated in the Main Altar with a Spanish and Genoese marble altarpiece which represents “la Apoteosis del Santísimo Cristo de la Eucaristía.” In the center of this altarpiece there is an oval window that lights up the Sagrario surrounded by the archangels, which is reached thanks to the breakage that was made in the ambulatory’s vault, where the Glory is represented with all the main saints. This enormous work was made by Narciso Tomé in 1732, supported by the Archbishop Diego de Astorga, who is buried in front of the altar.

The altarpiece is compound in its first body by a sculpture of the Virgin and the Baby Jesus and the reliefs of David and Ajimelec and the meeting of Abigail and David, where the author’s signature is. On the second body the sculptures of Saint Leocadia and Saint Casilda and over them the The Last Supper, higher up, Saint Eugenio and Saint Ildefonso and finally, crowning the altarpiece the three Theological Virtues, which were sculptured before in 1677.

More info about the closure and the special timetable

Sunday: free for those who was born in Toledo (showing IND) o who belongs to the Diocese; rest of Spanish special price: 2€.