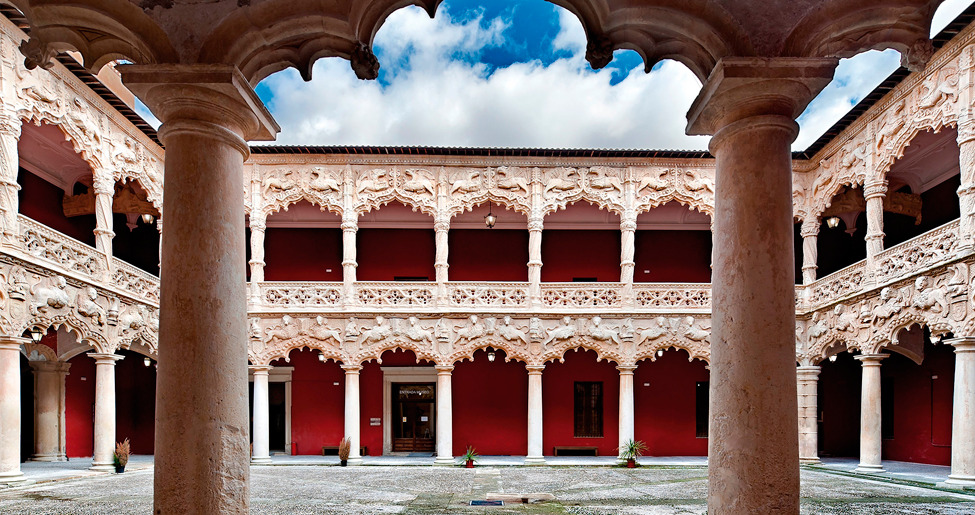 In the plaza of los Caídos (the fallen), the most beautiful building of the capital rises up, the Palace of the Dukes of El Infantado, described as “one of a kind” by those who built it, identifying it as a unique example of universal art.

The Place of El Infantado was built by the architect Juan Guas and the sculptor Egas Coeman at the request of the II Duke of El Infantado around 1480. It is a mix between palace and fortress and various artistic styles.

This building is the best representation of the school of thought of the Spanish Renaissance princes. Specifically, the duke Íñigo de Mendoza, who ordered it built as a sign of his power and position. Everything in the building breathes splendor, from its facade to its interior decorations. Christians and Muslims collaborated in its construction, directed by the architect Juan Guas, which is why we find elements from the Renaissance and the Gothic style from the north of Spain present, as well as Islamic decorations. Its magnificence is such that the Kings Philip II, Austria, and Philip V, Bourbon, chose it as the place to celebrate their weddings.

The spectacular facade, which is worth attentive contemplation, was carved with limestone brought especially from Tamajón, a town located 51 km from the city. Its diamond points, the upper gallery, and the main door are just a preview of the stone carvings that characterize the building, and that we can see reproduced in all their splendor in the patio. The curtain wall of the main facade responds to the models proposed by Filarete in his “Treatise on Architecture” (1465) and the constructions he planned in Milan; but, going against the regular order of this pattern, Juan Guas, appropriating the Andalusian esthetic, introduced an innovative arrangement with diamond points to form a rhomboidal pattern - “sebka” - creating a dynamism that surpasses the monotony of the longitudinal arrangement of the Italian canon.

Another point for the convergence of styles is the doorway, which, inspired by the designs used in the 14th century mudejar palaces, presents the door between columns, heraldic lintel, pointed arch, and facing figures at the spandrels; all profusely decorated with elements incorporated from the European Gothic - pegs, spheres, weavings, cardinas, traceries, rosettes, etc. - and from the Hispanic mudejar - epigraphs y muqarnas.  Insisting on this theme, another innovative item is the prolongation of the doorway, much bigger than its usual outline, with the incorporation of a large coat of arms supported by two colossi.

In the interior, the patio of the Lions resolves itself based on gothic designs that is to say, creating a situation in which the ornamentation dominates over the architectural values and whereby which the effect of the whole takes prominence over the quality of the detail; but, also, including facing figures - lions and griffins, an iconography extracted from the more Eastern Islamic tradition. The result is an exquisite staging, reiterative but not repetitive.

Equally original is the creation of an extensive garden, since, until then, these types of recreational spaces were exclusive to the palaces of al-Andalus or the monasteries that the Castilian Monarchy used as eventual residences. Likewise novel was the gallery with which the Infantado opens to the West, like “ancient fabric”, with semicircular arches on elliptical pillars.

The Museum of Guadalajara occupies part of the palace. The temporary exhibition rooms were those of the Duke and they preserve the frescoes form the 16th century. In addition to its collections, we can also see part of the elaborate coffered ceilings that decorate all the rooms.