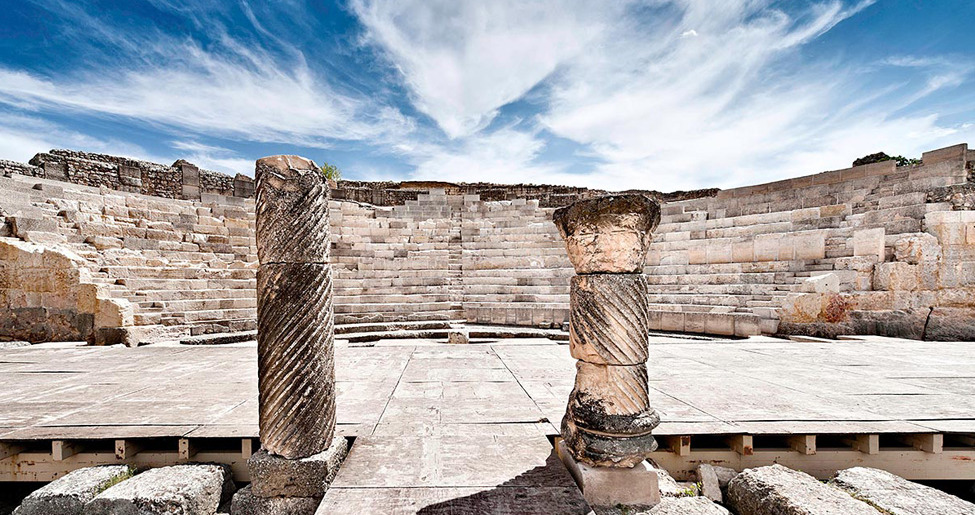 The Lapis Speculatis, which is in large number in the area’s mines and highly coveted in Rome as glass for windows and ornaments for parties, seems the main cause for its development and growth, according to Pilinio’s references. Its strategic location between Carthago Nova and its connection with Toletum Segontia; the wealth of its terrain, mines and farming, were the reasons behind its great splendour and monumentality.  This grandeur has allowed for important and well preserved ruins to remain nowadays that bring Rome closer to our current era and also the possibility to be witnesses of the cultural power of the empire on the plateau. Segóbriga housed a theatre, amphitheatre, which was used for big parties, public baths, temples which were for the imperial cult, markets, etc. It became a point of reference on the plateau as a Romanised urban lifestyle. Nowadays, all of the following can be visited: the aqueduct, necropolis, city, theatre, wall and main gate, cryptoporticus of the forum, theatre baths, basilica, forum, basilica hall, monumental baths, acropolis, the house of the mine procurator, amphitheatre, circus and visigoth basilica.

Visiting it is compulsory as it submerges the visitor in the roots of an empire that was built on the Manchegan plateau.

From the Carrascosa del Campo to Villamayor de Santiago road, in the town of Saelices, Cuenca.

Opening hours: from Tuesday to Sunday, 10am to 6pm. The last entrance is at 5pm.

Prices: General admission: 5€. Concession: 2.50€ (young people, students with a student card and groups of 15 or more people with a reservation). Retired and unemployed: 1€. Free: children under six years old.