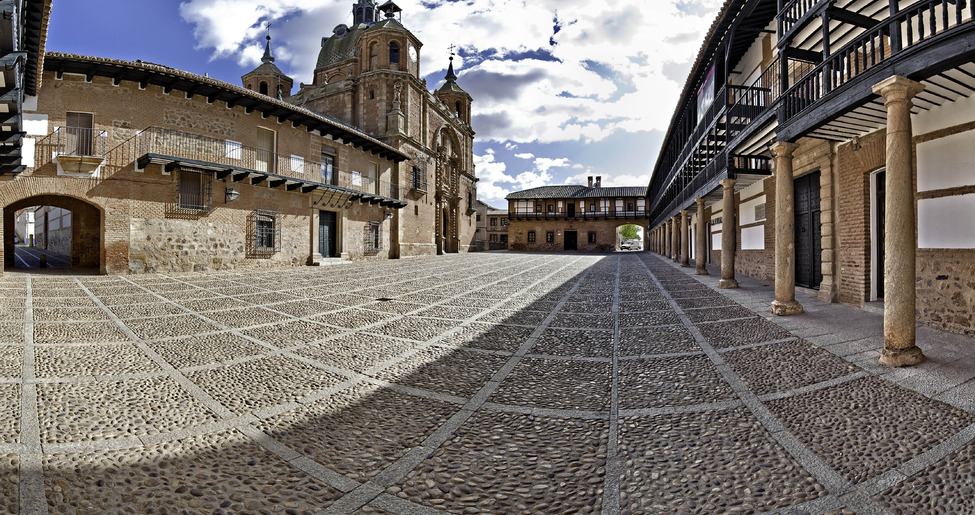 San Carlos del Valle opens up from its splendid Plaza Mayor square with an orthogonal projection and an almost-round perimeter. It all lies around a circular layout, the centre of that circumference being the Santísimo Cristo del Valle church, where the needle of the compass startles us. It is a late Baroque-style church with certain influxes of Neoclassical style. It is a huge cube where four towers overlap at its corners and an enormous dome emerges on top of the building. The temple has four façades, two of which have an extraordinarily beautiful main doorway in the middle which require our attention.

The incredibly lovely Plaza Mayor main square was built by the same architect with the intention of being like an atrium for the temple, to frame it within the complex. The square is a huge rectangle that measures almost 53 metres in length and 21 metres in width. On one side is the town hall with its overhanging balcony on wooden corbels; on the other side, the inn, which has a patio with carriages that open up to wooden verandas. On its sides there are brick archways that lead to the wide, straight, radial streets of the city.

Submerged in its spiral of order and arte, the town provides a welcoming visit of its flatland, the breadth of its appearance and the lack of desire to leave.