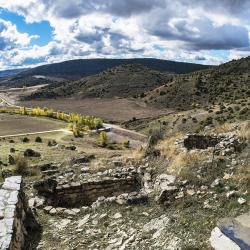 Los Casares archaeological site has two features. Up its hill, we find the remains of an old Muslim community of the Cordoba Caliphate. And underneath it, inside a cave, Paleolithic remains.

Los Casares cave in Riba de Saelices, constituted an important settlement in the Middle Paleolithic era. At 50,000 years old, it preserves multiple carvings on its walls and some rock paintings. Inside, lithic gadgets and remains of the Homo Neanderthals have been discovered, although their depictions were made by Homo sapiens, and they include horses, deer, woolly rhinoceroses and wolverines.

On the hill we find a tower in square grounds, erected as a fortress to support the Berber community which was established here in the 4th century, its peak being in the 10th century and that was gradually abandoned. In its surroundings we find the stonework and foundations of the houses and the remains of a plaster furnace which was in use until the 16th century. There was also a great palatial house, where coins from the mint in Zaragoza were discovered on the floor.

The Muslim settlement is open, from the town of Riba de Saelices, take the GU-949 in the direction of Ablanque. We will see a tower on a hill to our left. To visit the cave, contact the Association of Friends of the Museum of Molina, calling 949 831 102.